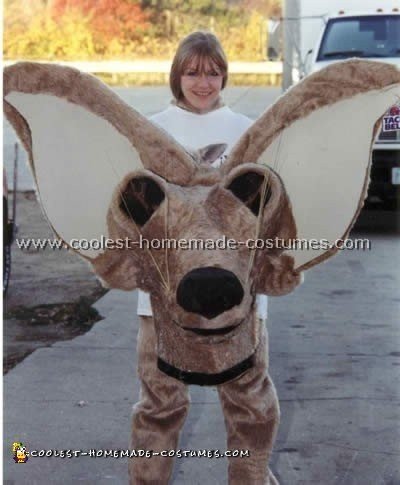 I had a Chihuahua as a pet. I wanted to be the Taco Bell dog. I started this dog costume by trying to make the head out of paper Mache’. It burst and I made a mess in the kitchen.

I went to the store and purchased four different size balls. I taped them all together and put stuffing in between the tape to create a skull shape. I covered the balls with fur material. The eyes were covered in a shiny silky material. The ears were made of cardboard with refrigerator paint on the inside of the ear to make it look waxy. The head was then glued to the “neck”.

The neck was made of cardboard. I used a black belt for the collar. I was able to see through the neck part. The rest of the costume was fur. I had a zipper in the back. I had a tail that curled up. It was made with a coat hanger inside the tail and the end of the hanger fit up through the zipper and onto a belt on the inside of the costume. I had made paws with elastic attaching them to the dog costume. On the inside I made the pads with felt and glued them on and stuffed them. I used felt for the nose too. I glued that on. I used some tall grass like stuff as the whiskers from a flower shop. I also made shoe covers out of fur.

I wore a Yo Quirro Taco Bell shirt and cut out a Taco Bell logo from a Doritos bag, glued it onto cardboard and attached it to the ear.