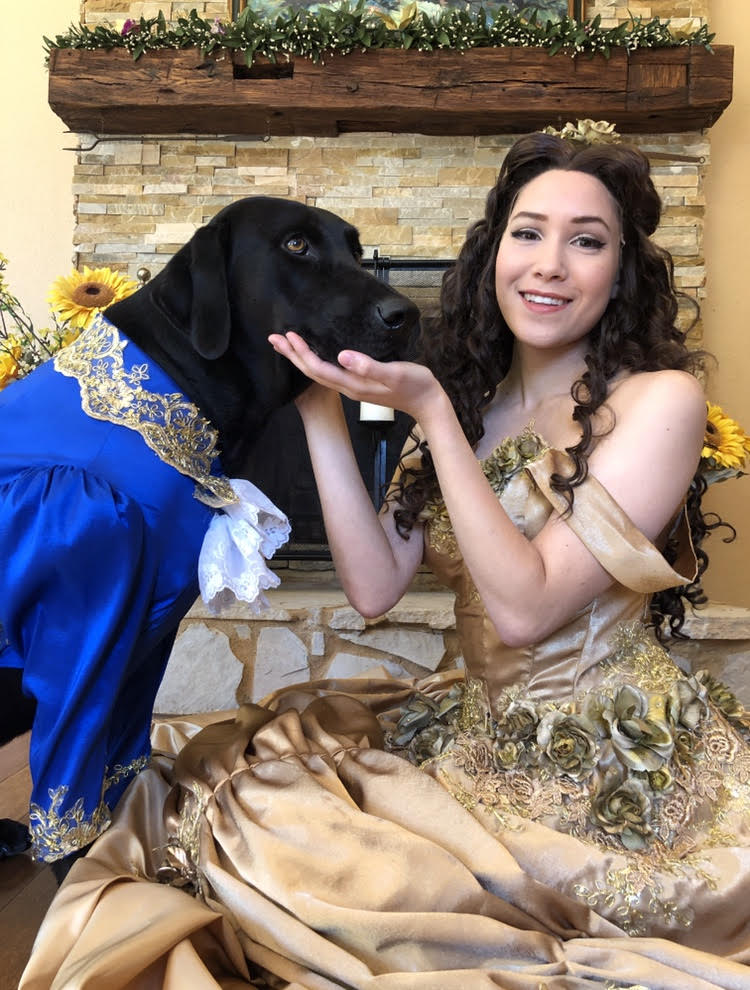 This dress was mostly finished a couple years before I thought to make it my Halloween costume, but the addition of my dog Loki’s costume is what definitely brought the heart to this project. Since both costumes are sewn from scratch, they had to start with patterns.

I used a commercial corset pattern for my top, making a mockup from scrap fabric to make sure that it fit me well, and I just figured out the skirt by pinning and draping fabric on my mannequin.

As for Loki’s costume pattern, I’m lucky that he’s a big dog, so he fits about a youth large or adult small T-shirt. I put a shirt on him and pinned it so that it would be fitted to his body, then drew some lines where the seams should be, cut up the shirt along the lines, and was able to draft a pattern from there.

My gold satin fabric came from the clearance aisle of a local fabric shop (hooray for creativity on a budget!); I also bought some gold appliques, and some flowers from the dollar store to spray paint gold, which I stitched on as accents.

Loki’s costume is made from stretch taffeta, which looks fancy but still has some flexibility for a dog, a lovely lace trim for the necktie, and some of the same leftover gold appliques.

Although I already had an acceptable finished dress from before, I decided to glam it up anyways to match my doggie. I pinned and hand stitched some ruffles to the skirt, added more roses, pinned some extra gold taffeta to a hoop skirt, and bought a new beautiful curly wig to style into Belle’s hair.

Loki wasn’t entirely happy about being made to dance for photos (hey, he is a Beast!) but we managed to get some nice shots, so I’m happy for that. Unfortunately with COVID there’s not much to go out to, so we sat on the couch and watched Hocus Pocus in costume to celebrate this Halloween :)