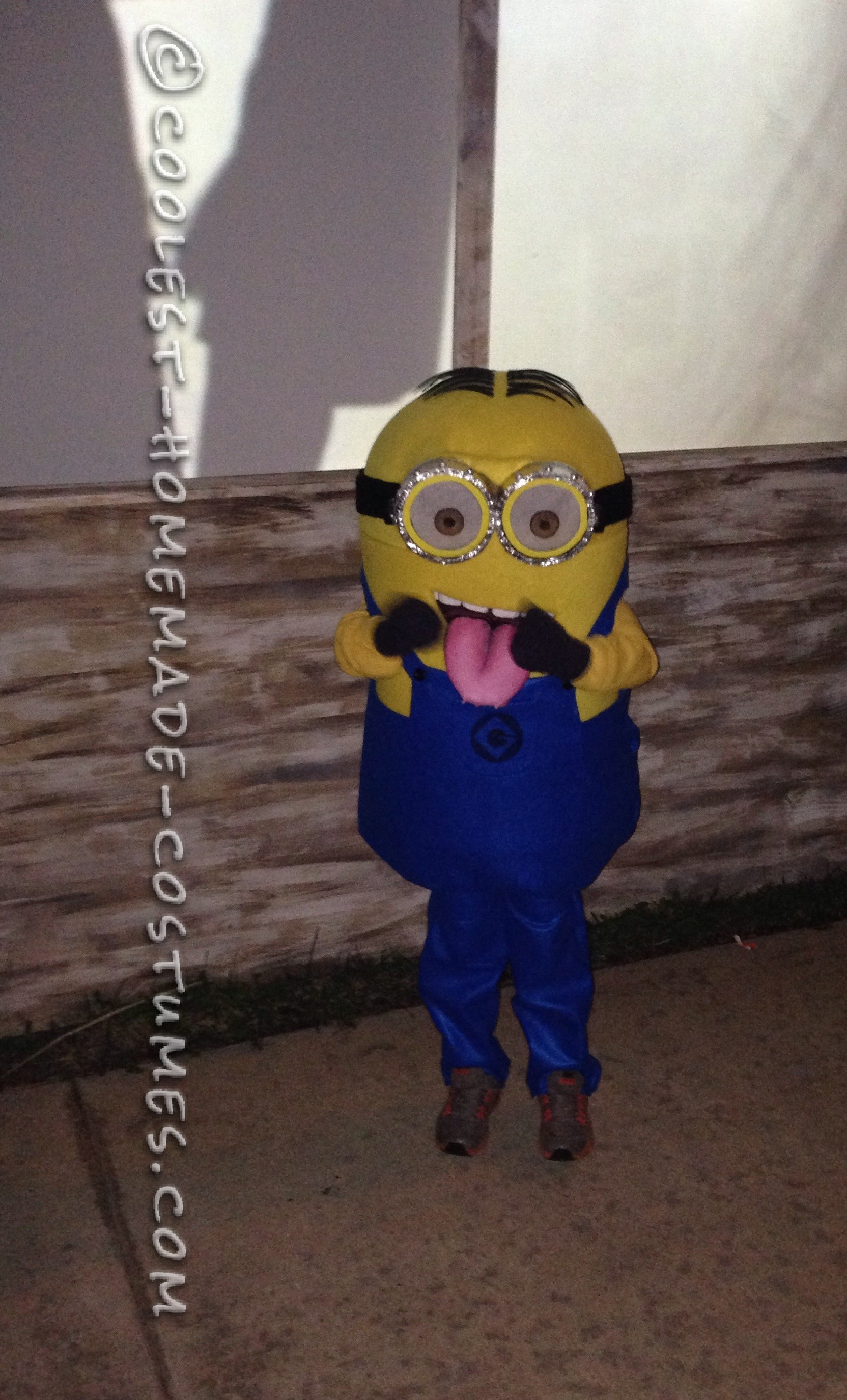 This year my 6 year old was a minion for Halloween! Halloween is especially special for my son because his birthday falls one week before the holiday. So lots of birthday love and merriment carry on into the holiday.

Minions were the number one children’s costume for 2013 and for good reason! These little guys are able to bring joy and laughter by their sheer actions. Although everything they say is unintelligible, the expressive looks on their faces and tones in their voices, allows them to connect with everyone in any language young or old.

I have made homemade costumes for three years now and it is truly rewarding. Although I wish I could take full credit in creating my costume, I have to give credit where credit is due. The base of my costume was from this Minion Costume…

It just grabbed my attention and I was stuck on the costume since. So I will just add how I adjusting the costume to fit with what items I could find.

My minion became a two eye minion because although I found the aluminum flashing, it was $16 for an entire roll. I couldn’t justify the cost and also wastefulness because I would only use a tiny bit. I’m not sure when aluminum flashing would ever come in handy for me again, unless I was to build a house maybe?? But since I didn’t see that occurring in the near future, so I roamed the aisles looking for an alternative. Then I came across these giant black rubber couplers in the piping aisle. They even had some metal rings on there, so I thought it would work out nicely for detailing. I bought one and cut it in half, but because they were rubber, cutting it was easy-peasy. That was $7. From there I took off the metal rings covered the rubber in aluminum foil. I then re-added the metal rings and added some rivet(?) details by shaping them from aluminum foil. Then I added eyes by using crinoline fabric and drawing eyes with pencil and sharpies because I found regular markers would bleed.

The other difference I had was the mouth. Although the smile is mostly the same, I actually botched it up so I decided to make a huge tongue to hide my mistake. None was wiser and everyone though I did the tongue intentionally. I shaped it from leftover camping foam and then cover it with pink craft foam paper. Then I added more detail and shading with color pencils and markers to add more dimension.

The hair was also made with craft foam paper in black. I actually asked my son to pick the hairstyle and he chose the “nerdy” one. So I just cut long thin strips with pointy edges and that was it! I just glued them on with the hot glue gun and that was that.

And my last alteration was actually making the overalls instead of using real ones. Again, the thrifty side of me did not want to buy new overalls, nor was driving a distance to a thrift store with *hopes* they had the perfect overalls an option. I just purchased a yard and a half of blue felt at Joanne’s when I bought the fleece. The felt was on sale for $2.99 a yard so score!

I’m not a sewer nor a seamstress so I hot glued my overalls together. I just measured by wrapping the fabric around the minion and my son. To clean up the edges I just folded them over and glued them down. I made a front pocket and free handed the logo with a Sharpie. I then sewed some black buttons on the front of the overalls and white buttons on the *inside* of the back of the overalls. I did this because I was trying to figure out the best way for my son to take his costume on and off. So my solution was I glued the straps of the overalls to the minion itself, then my son would just have to put on the pants and button them to the straps to stay up.

Overall we had a great time. My son won first place for funniest costume in Huntington Beach’s HalloweenFest. He felt like a celebrity because he took many pictures with other kids and received praise and laughs all around.

It was a real confidence booster too because although my son is six, teenage girls would come to him and scream that they loved him! Teenager boys would gives him high fives and tell him that he was awesome. At night when we went door to door, the people passing out candy with call their friends and family to the door to check him out.

Notes about the costume:
-Keeping warm was not an issue and it was ventilated enough because the arm holes that I had cut were large enough for air to pass through.
-Visibility had its issues, because although having two goggles allowed him to have a wider peripheral view, it was difficult for him to look down. So I had to hold his hand around any steps.
-Other than that it was still relatively lightweight, and walking forwards on wide sidewalks was not an issue. 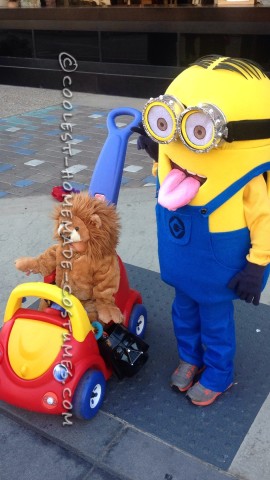 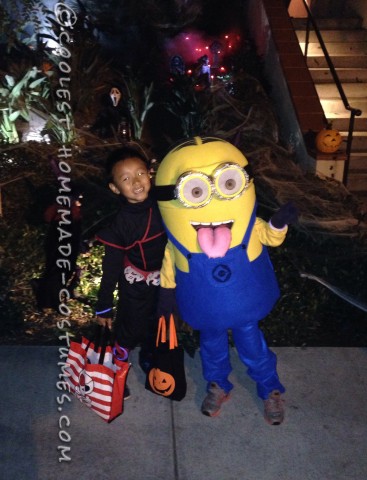 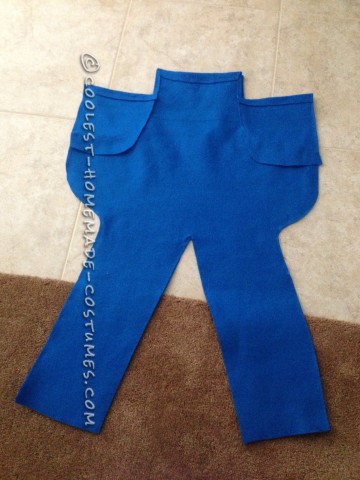 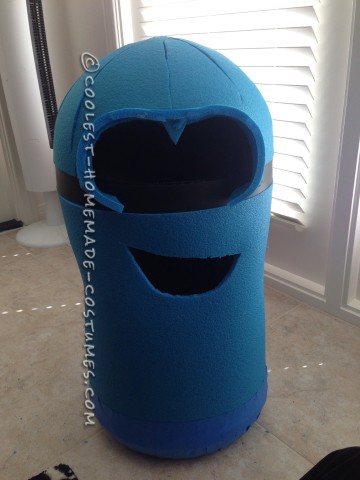 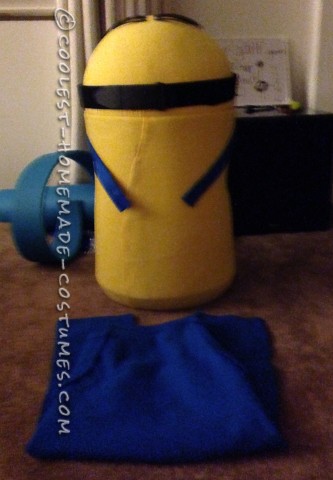 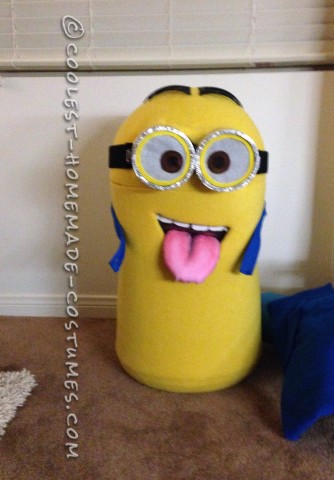 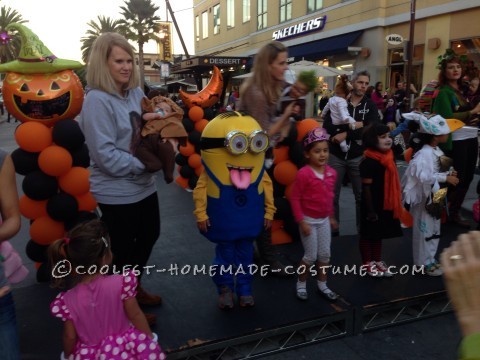 1 thought on “Despicable Me Minion Costume for a Child”