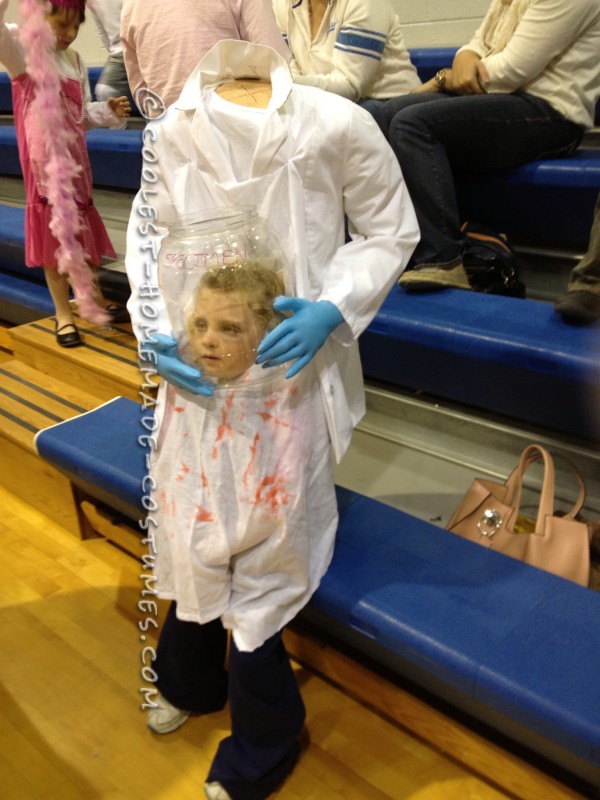 I saw this costume on the internet and thought it would be funny for our local costume competition.  As soon as she walked in everyone looked.

I framed the upper body using foam poster board to keep it light.  I cut slots to feed a belt through to hold the torso frame in place.  The nice thing about making it a scientist was using latex gloves for the hands, I stuffed them with pillow stiffing.  I also stuffed panty hose for the arms twisting them at ” the elbow” to make the arms appear more natural.  For lack of a better option, I used a paper plate painted with foundation ( yes makeup) to cover the neck opening in the lab coat that I covered the torso in.  The head jar is plastic and was a container for cheese balls with the bottom cut out.  I then split the crotch of an old pair of scrub pants and tied them up around the child’s shoiulders and gave her a pair of my shoes to make it proportional.  The costume ended up being very cheep, all bought was the poster board as everything else I had around the house.  i did use some gray face paint to give her a more realistic “dead” appearance.  The costume was comfortable to wear and my girl loved all the attention and of course she won the Contest hands downand had wonderful time in the process

A friend had her grand daughter at the event. she could not figure it out and kept asking ” what is wrong with her head”.   Even adults were stopping us to see how it was put together.  I always try to make my kids costumes and I received more questions and comments about this one than any other.  I love that people look foreward to seeing each years new idea. 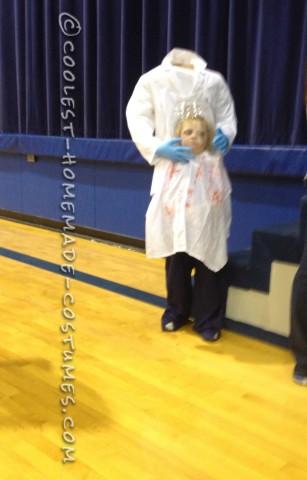