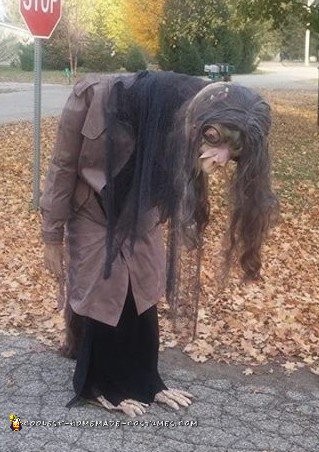 Halloween for our family it’s one of those day’s out of the year we truly look forward to celebrating, mainly because we get to delve into the creative process or recreating some of our favorite characters or coming up with a character of our own. Every costume we do is a team effort Mark and I sit down with our daughter and we ask her what she wants to be for Halloween then we start the process.

When our daughter was younger the costumes were pretty much simple, a fairy princess or a cute little animal. It wasn’t until the last four years that the costumes became a lot more detailed and a lot more work. If our daughter had her way we would probably spend $500.00  or more on her costumes… realistically that doesn’t happen, we generally keep the budget for her costumes between $40.00 to $60.00 – no need to break the bank.  This year when we asked our daughter what she wanted to be she had just watched the movie “Dark Crystal” so she decided upon a “Gelfling” to which she wanted to be able to move the head and neck around. That was an “oh heck “moment how do we create what our daughter wants and stay within budget. That’s where Goodwill, Thrift Stores, scraps and what some might consider trash comes in.

Materials for the Dark Crystal Inspired Costume with Moving Head and Neck:

The gathering of all the materials was a bit on the challenging side which it is every year. Every year we say we are going to start two months out but there always seems to be other projects that tend to get in front of our most favored holiday. The hunt begins, my husband Mark went on the hunt for the framing or the skeleton of the costume while I went on the hunt for the clothing and cosmetics of the costume. We couldn’t find exactly what we wanted to create a Gelfling so we decided we would stay within the idea but create our own creature that was inspired by the “Dark Crystal”

Neck: 4” PVC pipe was cut into 3 12” sections, and held together with the dog chain. The dog chain added enough strength to keep the sections of PVC pipe together and enough slack to give movement to head and neck. Attached to the PVC pipe paracord that was then affixed to the child’s helmet to again add movement of head and neck.

Arms: 2 three foot dowel rods each cut into 1 foot sections then held together with chain to allow natural movement of arms. Covering each section of the dowel rods was foam to add extra thickness.

We affixed the Star Wars mask to the end of the PVC pipe filling the head with batting ensuring the fullness then we hot glued an old Halloween wig atop the head and added some grey to it to give the wig an aged look. The furry animal type material was hot glued to the PVC pipe rand mask keeping enough slack to allow the head and neck to move freely.

The trench coat was added like clothing on top of the frame, then we added various paints to give the coat a more rugged look and to hide the frame. In addition we took dryer lint mixed it up with paint and Elmer’s Glue and randomly glued into on to the trench coat where the hump would be.

Hands: the hands were made of non-latex gloves turned inside out then painted a flesh color shaded a bit to match the coloring of the mask, then for finger nails we added just the cheap finger nails you can find at any dollar store. The finger nails were painted to look old and ugly.