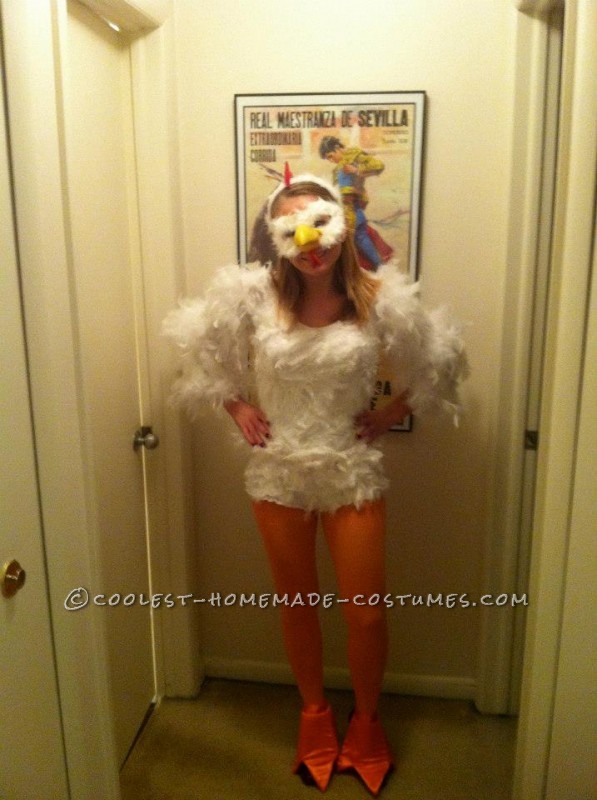 Last spring my boyfriend decided he wanted to go as Colonel Sanders (you know, from KFC) for Halloween this year. He hasn’t dressed up in over a decade! At first I refused to be his chicken, because I didn’t think it’d be possible to find a really cute, form-flattering chicken costume for a twenty-something woman. I was right, but in the end it was pretty easy to make one myself, and I hope to wear it again!

At first I wanted to be a yellow chicken, but what with the drama surrounding the Big Bird comment from the Presidential Debate, I decided to go with white. This actually made things easier because I did not have to dye the white leotard I bought (shelled out $21 for one with snaps so I could go to the bathroom easier). I got 5 packs of white feathers.  I had to go to a few different stores to find a decent price on feathers, which was frustrating because it was already Halloween week by this point.

I glued about 4 packs of feathers to the leotard and a pair of white short-shorts. I stretched the leotard over a fan so the feathers would still cover the whole thing after I put it on (boy was it see-through in any spots without feathers!! haha.. had to make sure to add more before heading out. Unfortunately in my rush, I decided the best thing to do would be glue right over the seam between my leotard and shorts.. there goes the extra money spent on a leotard with snaps!).

Super glue ABSOLUTELY does not work for feathers on cloth. I went through 3 bottles of fabric glue and a bottle of gorilla glue on this. Next time I am going to have to look for an industrial-size bottle. I also took a white feather boa, cut it in half and wrapped it around my arm, sewing it down in a few spots.

I drew a mask with eyeholes on oaktag and cut it out. I poked additional holes to attach the elastic to hold it on (removed elastic string from the chicken nose I bought). I glued white feathers onto the mask and then glued on the chicken nose.

I took an old headband and hot-glued white felt on it. I drew a chicken “comb” on red felt, triple-folded the felt, and hot-glued the three layers together and then onto the headband.

I wore orange stockings and red-orange platform pumps with the shoe covers from child’s chicken costume over them.

My best accessory was my boyfriend (who is from Kentucky, by the way) as the Colonel. He wore a cheap white suit with black pocket square, a white button-down shirt, dress shoes theater facial hair adhered with latex glue, half-frame glasses I ordered online, spray-on hair dye (a mess, and not that effective), and carried a cane from a costume store.

We were TOTALLY robbed of first place in a costume contest at a local restaurant. The “winner” was in a store-bought penguin costume. But we danced like fools to try to rack up more votes and in the end had a great time with our friends! 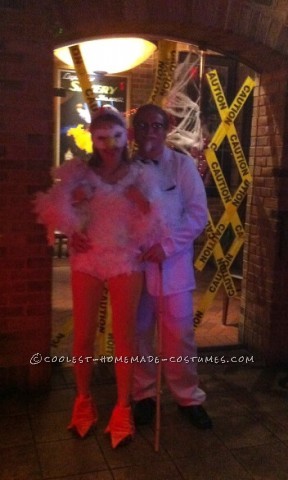