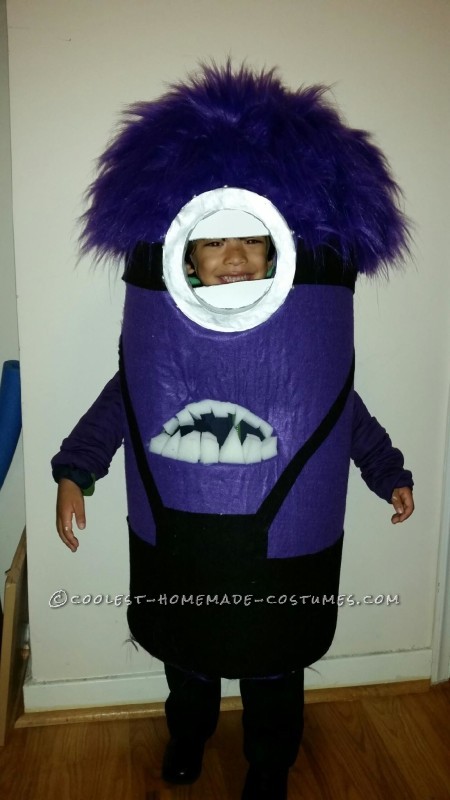 My 4 year old really likes the Despicable Me movies, and fell in love with the minions. As soon as he saw the evil purple minions, he declared that’s what he wanted to be for Halloween. I spent a couple of months researching toddler and purple minion costumes until I found one that I liked.

My son had been telling everyone who would listen what he was going to be for Halloween, and I wasn’t about to disappoint him. I have a bad tendency to put things off until the last minute, and despite my best efforts, I ended up completing this costume at 4 AM the night before Halloween. But my sleep-deprived self counted it worth every sleepless minute to have my little boy come to me and tell me how much he loved his costume. I knew I had achieved my goal when my fiance, who has an extreme eye for detail, woke up out of his sleep to behold my work of art. I used foam rubber to create a cylinder body, and to make a circle for the base of the goggle. I then hot glued purple felt to the body. I wanted it to have a smooth surface so I painstakingly would glue a little bit; smooth it out; glue a little bit; smooth it out. This was the most time consuming part of the whole costume. I cut out holes for both arms, the mouth and the eye (or the goggle). I used purple knit to make elongated arms that I could bunch up on my son’s arms when he was in the costume. I used white foam rubber to cut out some crooked, jagged teeth and hot glued them to the mouth. I covered the circle for the goggle in brown paper, the used drops of hot glue for the little knots on the side of the goggle. Then I sprayed painted that silver. I glued the painted goggle in the goggle-hole on the body. I used long pile purple fake fur for the crazy hair. I used black felt for the goggle strap and for the overalls. Later before we actually went trick or treating, I added a patch pocket with an ‘M’ painted on it, but the little man was pretty tuckered out for anymore picture taking by that time. I have never been a part of a Halloween costume that got the kind of reaction that this one did. Grown ups and kids alike were asking to take pictures of him; kids wanted to touch it – he was treated like an absolute celebrity! Adults commented constantly that it was the best costume that they had seen all night. The pride that my little man had in telling EVERYONE that his mama made his costume was beyond priceless for me. He had people telling him that his mama was brilliant! Overall, Halloween’s don’t come much better than what my family experienced last night. The whole experience just makes me love my kid a little bit more!!! 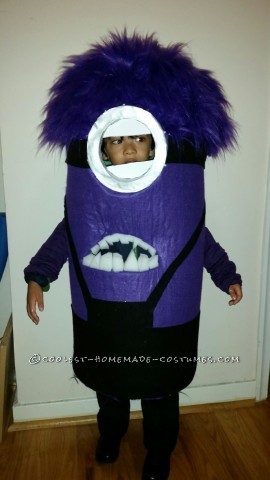 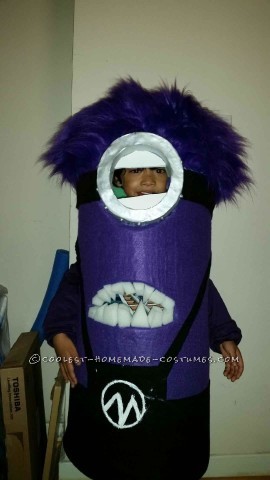