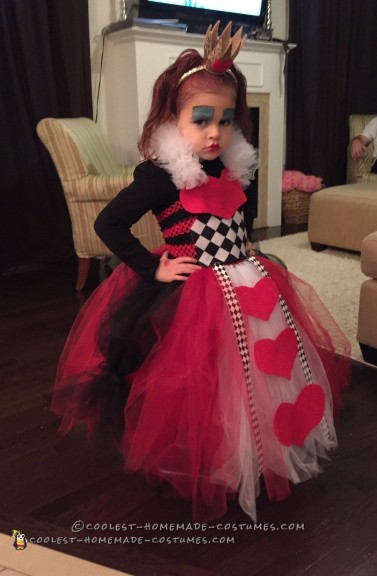 The initial inspiration for this Queen of Hearts costume was a simple gold crown on a headband I found at a retail store. My vision was born – my daughter must be the queen of hearts! Slowly, I sought out pieces and materials to make my vision come to life. After a few weeks of dedication, I finally completed the costume. But of course, wearing the costume was not enough; my daughter had to play the part, and she did just that! She was so committed to the costume and made me play her clips of the queen of hearts on repeat. Now, my daughter is only four and had never seen any of the Alice in Wonderland movies before, but she too was on a mission to play the role perfectly! And she did. She would yell, “off with your head” and really got into character.

After taking tons of pictures and posting them on Facebook, we were approached by the MukiBaum foundation. They were throwing their first annual gala to raise money for kids and adults with autism and help create new programs. The theme of their gala was “Alice in wonderland”, so they asked if my daughter would help at the gala. They wanted her to walk around during cocktails, in costume, selling red roses to help raise money for this great foundation. And my daughter was a pro! She went and raised over $200 selling red roses to the guests. She was a huge hit with the crowd and they were raving about her costume. She would approach the guests and ask “would you like to buy a rose?” People bought multiple roses at $5.00 per rose! No one could say no. She looked too amazing!

I am so proud of her. She got into costume and into character and never looked back. One funny moment that comes to mind was when someone at the gala approached her and said “aww, what a beautiful princess!” To which my daughter replied, with attitude and all, “I’m a queen. OFF WITH YOUR HEAD!” Everyone burst out into laughter.

This costume took many long hours to make and it was well worth it. It came out amazing. I hope you like it as much as we do. 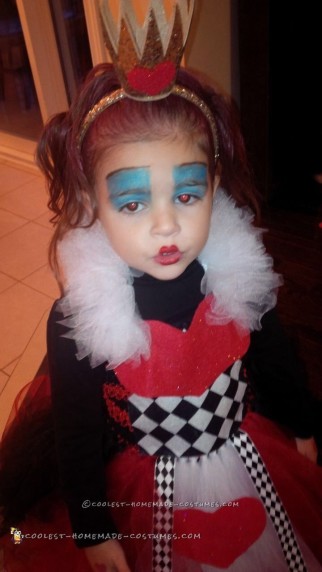