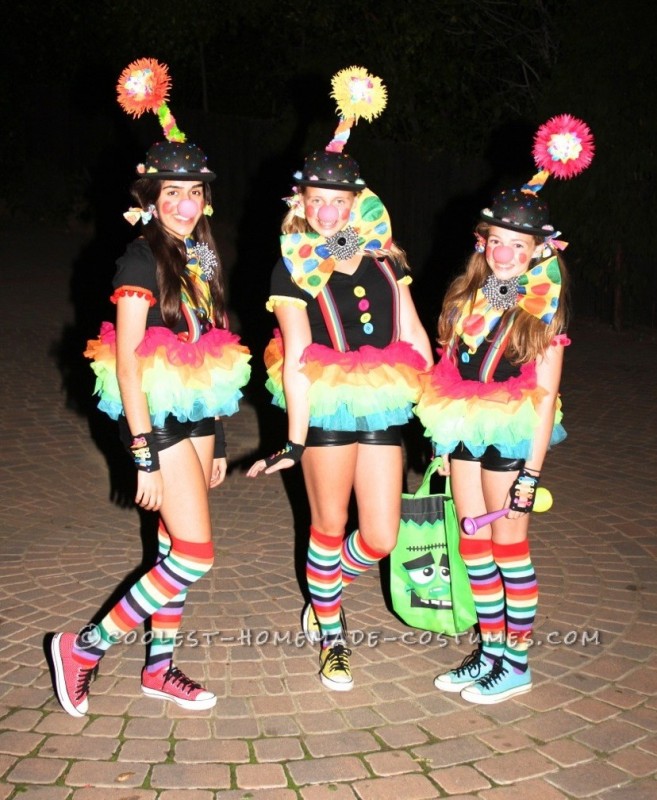 My daughter wanted to bring the “clown” back.  Of course it had to be a very cute clown and original.  A task I didn’t think I was going to be able to complete… and I love Halloween and homemade costumes!  I purchased rainbow light up tutus at a dance store.  Wow, these ended up being great because we were always able to spot them on the dark streets.

Then I purchased black tshirts at Target and embellished them with pompoms on the sleeve that I purchased at Joanne’s and hot glued on.  I also hot glued on rainbow colored buttons, which stood out on the black tshirt.  Then purchased rainbow suspender and knee socks.  Went to Michael’s and found some cool flowers.  Hot glued one onto a costume store bought bow tie.  The others I added to a black hat I purchased at the costume store.  Also added embellishments to the hat as well.  Purchased rainbow gloves and found some colorful shoes in my daughter’s closet and added black laces.

I’m not a big clown fan and thought it was an impossible task to make a clown look cute.  But, think we succeed… ended up loving their costumes!