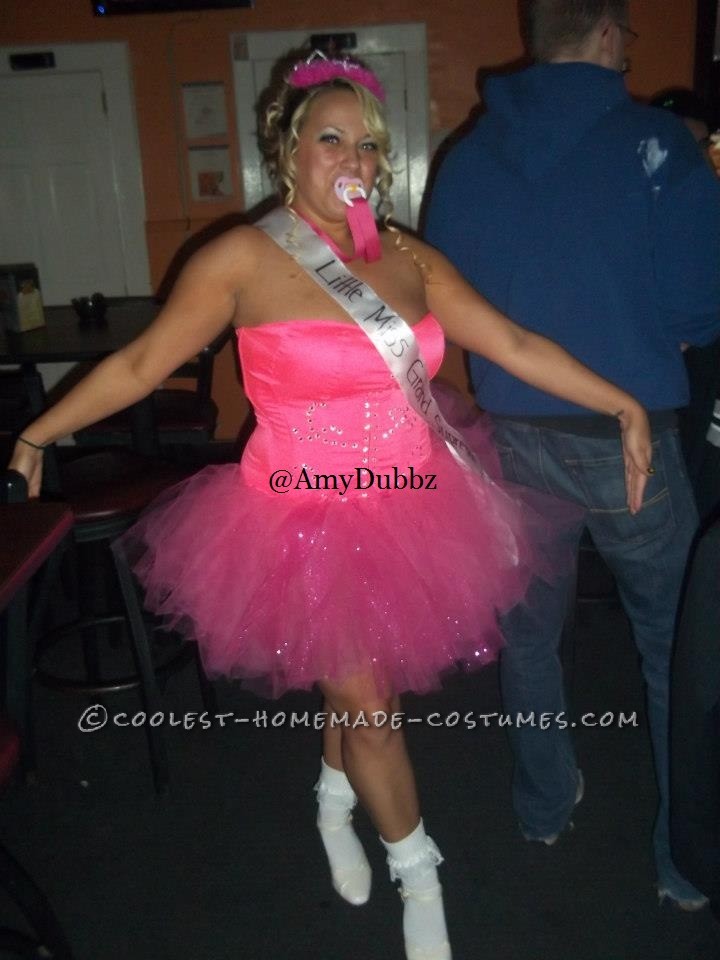 I always think of original ideas for Halloween, instead of buying a store costume.  With this Tiaras costume, I was hoping to save money, but ended up spending over $50 for everything because of poor planning and rushing to get everything done on time!  I found a YouTube tutorial on how to make the TuTu using only tulle and ribbon. I didn’t even have to sew anything!  I got pink ribbon and wrapped it around my waist to see how long it needed to be and left it a little longer than that so I could tie it and make a bow in the back.

Once I cut all the tulle to a TON of strips, I took the pieces, folded them in half, then made a loop and pulled it through the loop on the ribbon and repeated that like 1000 times and ended up with the full skirt!!  I originally bought pink tulle with glitter on it, but it ended up not being enough for the full skirt, but I’m glad it wasn’t.  The glitter was EVERYWHERE when I was done with it and even now, there’s glitter everywhere that I sat and changed into and out of my costume, so if you’re attempting this costume, don’t use the glitter tulle!!

I bought a pink corset at Charlotte Russe for $15, which was a steal!  Then I bought rhinestones at Walmart to decorate the corset.  Since they only make those cute lace socks for kids, I had to make those myself too. I bought lace trim and used an old pair of my moms socks and sewed the trim to them.  I wore the costume to a party for work and didn’t have time to curl my hair, and I realized that I kept losing / dropping my pacifier, so when I dressed up again and got all dolled up and did an updo, I thought to tie the pacifier around my neck with the remaining ribbon I had left from the skirt.

For the sash, I just bought a spool of satin ribbon and wrote on it with a sharpie.  The crown I had I bought from Michael’s craft store.  I was going to wear a diaper under my tutu, but since it was so fluffy, you wouldn’t be able to see it, so I just wore pink bloomers.