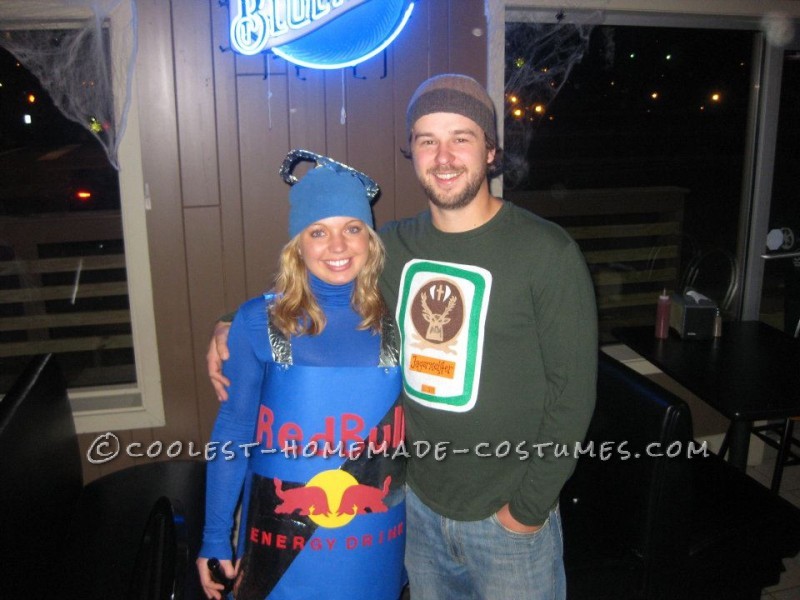 This cute and creative couple costume – A Jager Bomb was so fun to make! At the time I was a bartender and planned to enter into a costume contest so the Jager Bomb idea seemed like a great idea. To make the Redbull can I used a blue piece of poster board, covered select areas in tin foil, cut foam letters out for the words, riveted the back closed with a corset style ribbon/rivet sash (for easy removal!) and attached a cardboard cut-out, covered in tin fol, to a blue beanie I had (for the pop top!)

I wore a blue turtleneck I had and blue tights underneath. Looked great (and other than my lack of being able to bend fully), it was very comfortable! For my boyfriend’s costume, in addition to a pair of jeans and boots, all he had to wear was a t-shirt I custom made for him! He of course loved the simplicity in it for him. You know men!

I used an old long-sleeved t-shirt of his and cut pieces out of  felt to glue (using fabric glue) to in the shape and words of a Jagermeister bottle. So easy! It was cool too because apart we were a Redbull can and a Jagermeister bottle, but together we were a Jager Bomb! So fun!! This project, unbelievably, only added up to a few cents over $15! We will see if this year I can come up with something even better!

Until I enter again…