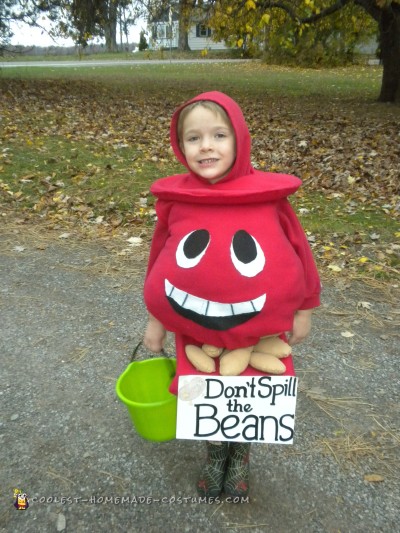 Every year I ask my kids what they want to dress up as for Halloween. My mother used to make my costumes growing up and I’ve continued the tradition with my own kids. Although she passed away before meeting my kids, I know she would be proud of the costumes I’ve created with my kids imaginations. My son is 4 years old and he loves to play the Hasbro game Don’t Spill the Beans. He decided that’s what he wanted to be this year! I try to keep the costume supplies total price under $25.

I used red fleece for the body and to cover the tray for the beans. The tray was a card board box recycled from the purchase of a case of pop cans. I cut a hole through the center for my son to step into the tray and it would sit snug around his waist. I used tan felt for the beans. White and black felt for the face. I had a can of spray adhesive to adhere the eyes and mouth and beans to the “tray”. I used a black sharpie to make teeth on the mouth.

I used a metal wreath frame to create the dish that the beans are placed on, that was also covered with fleece. I cut a whole in the middle of it to slide it over my sons head. I used a red hoodie he already had and bought a pair of red sweat pants. I used two pieces of white card stock I had on hand and wrote “don’t spill the beans” on both pieces and drew a bean in the corner of the cardstock. I attached them with squares of Velcro (I had on hand also) to the front and back of the tray. to create the roundness of the body I stuffed pillow batting between two pieces of felt and closed it by sewing it up. the beans were also stuffed with pillow batting, I had on hand, and sewn shut.

What do you think? Our neighbors loved it! He also won a local contest for most creative costume. Happy Halloween! and remember Don’t Spill the Beans! or the candy!