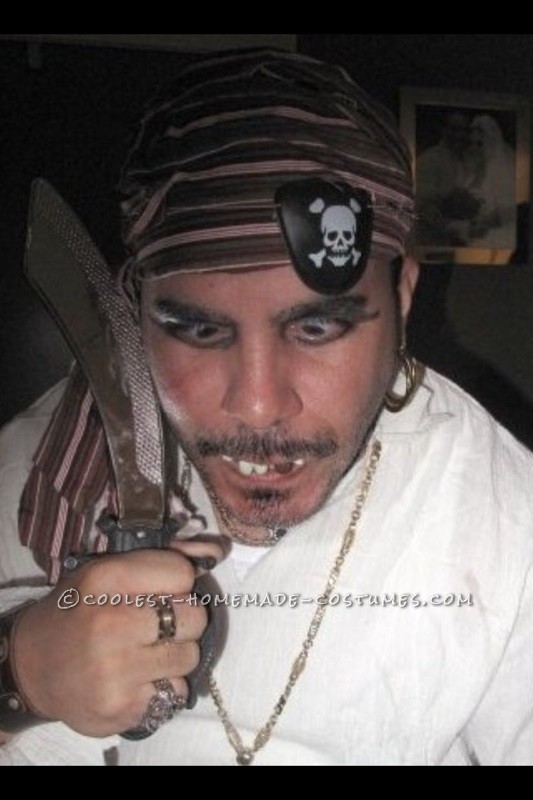 My Pirate costume took about half an hour, had my wife do the make up in my face, put on some crazy all shirt and made the pants of a old table cloth. Painted my nails black and put on fake teeth. Had some old boots, rings and chains; borrowed my sons fake knife and I was ready to go.

Had a great night with friends and family, nobody knew how crazy I was till they saw me dressed up. The most funny part was taking pictures with kids, they really thought that I was a real pirate specially because of the smell of alcohol and my funny accent.

The hardest part was to keep my eyes crossed for the pictures. Everyone loved the costume since it fit very well with my personality.

Coolest part of the costume was the makeup, it looked so real. The hard part like I mentioned before was to keep my eyes crossed.

I did not win any contest because I never entered one, but everyone said that I should have.

My wife dressed like a sexy pirate and we made a great couple. Had a lot of looks back even when we were driving in the car. People reacted with “great”, wows, laughs and many complements.

When out for a walk with my kids and my friends, you will not believe how many people came to me and asked me if they could take a picture with me, and also commented on how real and stinky I was, I did go all out.

I put on some smell in a can and it worked great, not even I could stand the smell at the beginning. Had to air it out so that I can be at the party and believe me; it wasn’t easy.

Now I moved to Tampa Fl, and looking foward to dress up again, because as you know Tampa is known to be a pirate city.