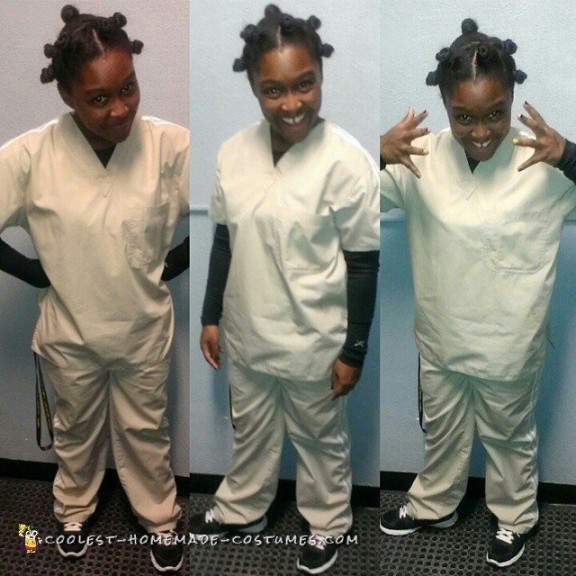 After binging on Orange is the New Black, it hit me that I could pull off being Crazy Eyes. We kinda look alike, even down to the gap!

After searching through my closet and drawers of old clothes, I came across an old scrub uniform and just put a long black tee shirt underneath. In the show, Crazy Eyes usually has her hair in Bantu Knots so I did the same. Bantu Knots are basically a protective style used by women with natural hair texture as another method to adding more definition of curls to their head without the use of heat.

And as for my gap, I did not have to do much transformation there since I was born with it (Thanks Grandma for passing it down to me!). The best part of my costume was mostly seeing everyones reaction to it, and they LOVED it!!! They recognized who I was immediantly because you can’t binge watch on Netflix as a college student without watching OITNB and knowing who Crazy Eyes was. So many people said I pulled it off so well and I was just so shocked. I would tell them I honestly pulled some clothes from my closet and twisted my hair up.

So at work, there was a Halloween costume contest, I won of course, and got free Zoo tickets. Then at the Halloween Dance, I entered as well. I was pretty nervous because there was some tough competition, but I won first place of that too and got a $20 Chipotle gift card!!!

The thing that I just love the most was the reaction from social media. I posted to Facebook and got about 100 likes, I never got that many, probably only my graduation pictures. Then I went to the wonderful Instagram. The likes and commments just kept pouring in. People were tagging their friends, commenting how great my costume was, then the greatest thing of all happpened. A lot of people were tagging the actress who plays Crazy Eyes so she could see this picture, then she liked my picture on Intsagram!!! Uzo Aduba liked my picture portraying her role on Instagram!! I was so happy and overwhelemed that even more likes came through. I got over 500 likes and felt like a celebrity.

All of my friends were saying that I made it to the popular page on Instagram, back when they had it. It was just so amazing to get all of that attention within such a short time frame. I don’t think I could top a performance like that, it was the greatest of all time!