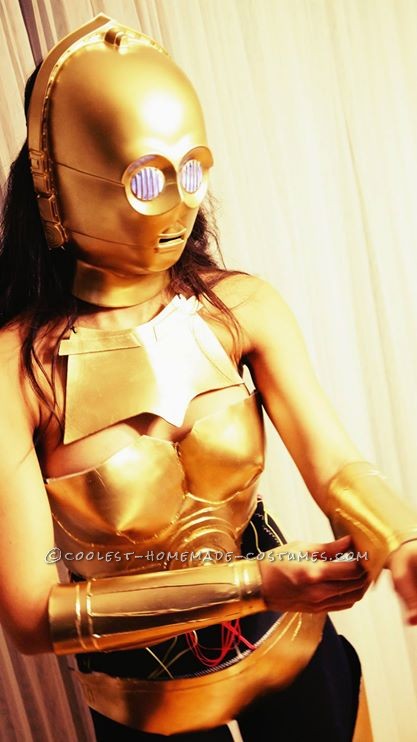 My boyfriend and I are really, really into Halloween. We tend to make our own costumes and get super excited about what next year might bring. He has been wanting to do a Star Wars themed Halloween night forever, but to me the obvious Princess/Hans Solo outfits have been done. A summer flu that (obviously) led to a Star Wars marathon  not only reminded me of my love for C3PO, the geeky robot that talks too much, but also made Halloween 2014 super clear.

In my cough syrup high I decided: WE (all of my friends) were going to do dress up as our favorite Star Wars character – and, I would be C3PO. I mean, why couldn’t I be my favorite character? Why couldn’t we all be? I called everyone I knew. They all reminded me it was July. This of course, sent me into a panic – only three months to make this costume and I had no idea where to start!

This began late nights of research (how does one make robot armor?), amazon obsessions over what mask (Vinyl? Rubber? the $400 replica?), attempts at making my own mask (NOT a good idea), and loads of spending on craft supplies (89% of which went unused).

In the end, I was very happy with my result. My boyfriend (finally) got to be Boba Fett – every boy’s dream, and we had a blast. Even though it rained, hailed and snowed.

The mask was bought at a local (downtown Toronto) Halloween store. I called all of the costumes shops because I decided I needed to try them on to see which would feel better. Nobody had any, but this particular store was very nice to order some in for me. They took a while to get in – but when they did, boy was I happy I got to try them on! I had originally wanted a full head mask but after trying it on realized I would suffocate in it, and did not like the lack of structure in its rubbery glory. I bought the $12 half mask, fitted it with a dollar store LED lights and covered the mouth piece loosely with some black duct tape. Everyone loved it, but holy moly did my head hurt the next day.

The costume body was made with craft foam, the kid craft kind, with about four layers of white glue, then spray painted. Michael’s sells the roll for about $10. I used it all right up, plus one-two extra sheets. I made a very loose pattern and then Trial and Errored it for the most part. The bodice had a zipper in the back holding it together, as for the legs and arms I tried to Velcro it all together but that did not work well, so bring safety pins with you.

I have never shared my costume before, and have always been quite proud of the work put into them, but this one takes the cake. 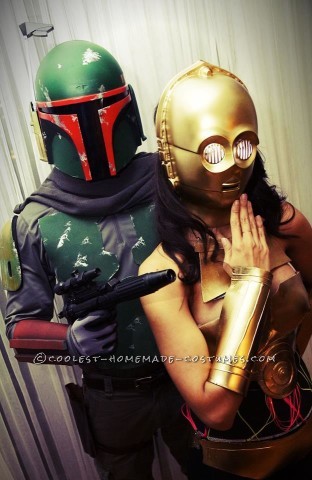