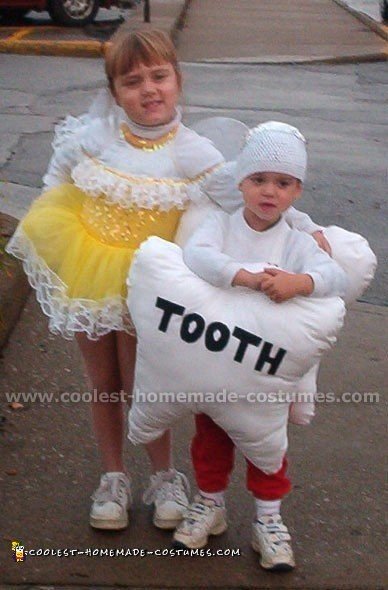 Here’s a cool couple costume idea. This is my daughter as the tooth fairy and my son as her tooth! We had so much fun with this couple costume!

First, I bought a white sheet and drew the shape of a tooth on it. Next, cut 4 pieces to have a front and back. Sew 2 pieces together and leave a space to stuff with stuffing. Do the same to the other 2 pieces. Sew the spaces shut and you have your front and back of the molar.

I used felt to cut out the letters and glued them on. You can’t see in the Halloween image, but the felt is glittery. I used elastic to connect the front and back of the tooth together. It also helps as it goes over the shoulders and I wanted it to be easy for him to handle and not have to worry about falling or having to hang on to it.

For his head I wanted it to look like he had a cavity so I bought a white hat and used silver reflective foil tape to cover the top of the hat (it’s a bit hard to see it in the Halloween image). That kind of tape is usually used in construction and can be found at your local hardware store. I made this costume within a day and had lots of fun doing it! Total Spent: $6