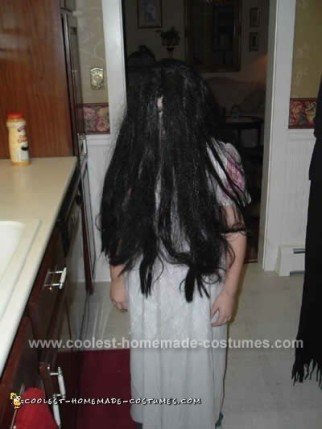 This costume idea came from the wearer, my daughter Julie. She absolutely loves the movie ‘The Ring’ and thinks ‘Samara’ is so scary. I tried to talk her out of it because people who have not seen the movie wouldn’t know who she was supposed to be… my daughter was insistent.

I found the wig easily and it cost around $4. She needed a white dress hmmmm… I looked around and found a pre-made bride costume that ran around $11. Since you don’t see Samara’s face because her hair is in it no makeup was necessary. I just teased up the wig a bit to make it look like Samara’s and fashioned it to hang in front of my Julie’s face when she tilted her head down.

I was surprised so many people knew who she was. I guess a lot of people have seen the movie. She won 1st prize for scariest costume at two different parties.

Good luck with your own costume ideas! 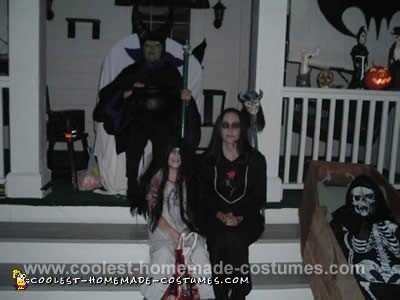