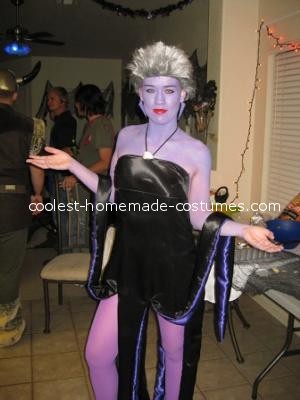 I had an idea, but no idea how to execute it. I wanted to dress up as Ursula from The Little Mermaid, but I had no idea where to begin. Then one day I found a satin kids dress that was a little big on me and really wide at the bottom at a nearby Savers, and my plan took shape.

The top of the dress was a fold over, so I pulled the seams and the sequence off, turned it around and use the extra fabric there to make the breast part and achieve the drop in the back of the dress. The original dress was the same height all the way around. I also pulled out the side seems to remove small fabric loops where there had been cords and took them in to fit my waist.

For the tentacles, I cut the bottom of the Dress in a V shape “VVVV”, took the V’s that came off, turned them around and sewed them to the V’s still attached and made the tentacles twice as long. I then sewed some purple satin fabric I found at a Michaels to the underside and flipped them.

The dress is held up by the seashell “necklace”. Eventually I am going to paint that gold and insert a music device with a led light, so that when I hit a button, it lights up and Ariel’s voice will come out of the shell.

Earrings are real shells painted purple with small holes in them with a hook earring pushed through.

These pictures were from Halloween, which was my trial run. I hope to have it completed for Comicon next year. 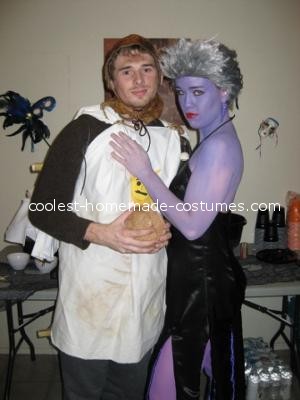 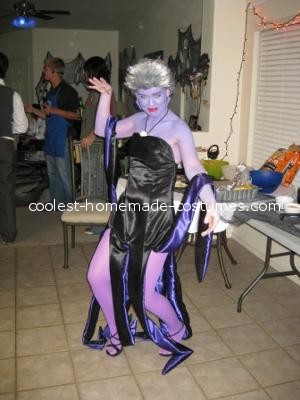 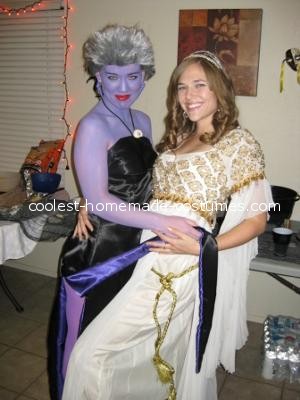