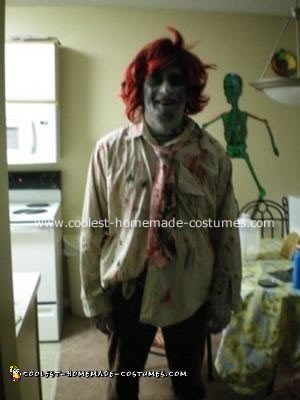 I had just found this new job, and been working there for less than a month when they announced that we should dress up to come to work on Halloween day. I had nothing to use and I wasn’t going to buy a costume only to wear to work so my daughters and my wife decided to make me a Zombie Halloween costume.

My wife went though some old clothing that I had and my daughters tore it up. I wanted to look like a zombie but since I was going to the office, we thought that a formal shift and a tie would give it a nice touch. After tearing everything, one of my daughter’s painted it the clothing with red and black painting. While another one of my daughter’s painted my face white, with black around my eyes and some red to see that I was bleeding.

We didn’t know what to do with my head, since I have short hair, so my oldest daughter dug through some old Halloween costumes and found an old women wig that she had worn a previous Halloween, they messed it all up and put it on me and I became a zombie.

I won 3rd prize at my office that day and no one recognized me. My granddaughter was terrified of me and everyone said that when I put my glasses on I mess up the costume, because I looked like an old Zombie.