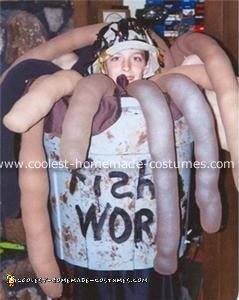 To make the giant bucket of fishing worms is very cheap and inexpensive. First we bought a silver 30 gallon trashcan and cut the bottom out of it. We bought some paint and painted “Fishin Worms” on the outside, we added a little paint to look like dirt to the trash can.

We bought a small piece of brown fabric to go over the top to look like dirt (cut a hole a hole in the top of the fabric big enough for someones head to go through.) We then hot glued it to the trashcan.

We then bought about 15 pantyhose and filled them with cotton. Make them different lengths. After they were filled we tied them and sewed them to the brown fabric on the top. We then took a fishing hat and attached fishing lewers to it to give it another cool affect.

Last we put straps on the inside to go over the shoulders to hold it up. You put the trash can on and put your hat on and you have a cool worms costume that was easy and cheap.

Coolest Can of Worms Costume