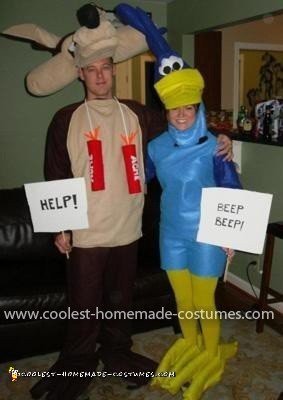 This year my husband and I rocked out our favorite Looney Toon characters Wile E Coyote and the Roadrunner. I made his costume first out of 5 yards of fleece. I made some elastic-waist pants and a fleece shirt. His coyote head started with a baseball hat, cardboard and foam. I sewed and glued the fleece around this and stuffed it with poly fill to build his head and sewed the ears into the seams.

I made his feet with foam that I shaped into toes and covered with fleece, he pinned these on his sneakers. I made a long tail stuffed with polyfil and pinned it on the back of his pants. For the Acme TNT I used the foam and glued it into a roll and glued red and white felt on for the lettering, and I inserted orange pipe cleaners to look like sparks coming out of dynamite. I glued in cord so it would hang around his neck.

For the roadrunner I used the same method with a baseball cap and foam and felt glued on. His big mop feather has a piece of stiff cardboard and polyfil tightly stuffed so that it would stand up straight. I made a shirt and cut the sleeves with a feather edge and I made shorts to wear over my yellow tights.

The feet are also foam with felt glued on. The tail has on long piece of cardboard sandwiched in between foam and is pinned on the back of my shirt to stand up straight. Last, I made the classic signs that they hold up since neither of them speak in the cartoon.

We had a blast making these Homemade Wile E Coyote and Roadrunner Couple Costumes and took a lot of cameo pictures! 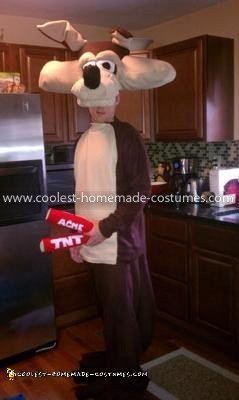 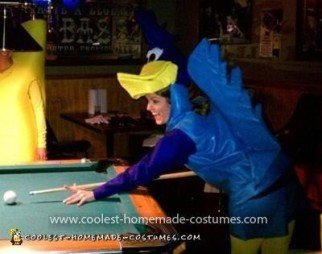