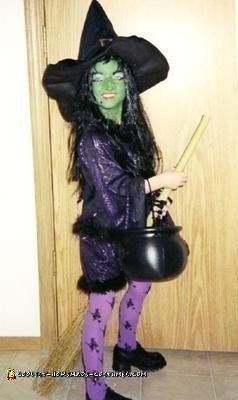 My daughter, Megan, decided she wanted a wicked witch Halloween costume. I knew that this was a pretty generic costume, but I decided to accessorize and make it into something fabulous.

This was a store bought witch costume that only came with the skirt and top, but of course I had to give it a few extras. I found the great witch hat at a dollar store and attached a spider hanging from the top of it using thread. We added a wig of long black hair, long black fingernails, a wicker broom, witch tights, black boots, and a cauldron for her treats. But the fun part of the whole thing was the makeup. We attached a lightweight rubber nose over her nose and painted her entire face and neck green. We then added huge eyebrows/eyelashes using black face paint, blue eyeshadow, bright red lips, and even a mole on her chin.

She was done up so well that when she showed up to her dance class party, nobody recognized her, not even her teacher! They just couldn’t believe that this was a fair skinned, freckle faced, blonde little girl. Even though a witch was not an original idea, we entered a local costume contest anyway and I couldn’t believe it when she got first place!