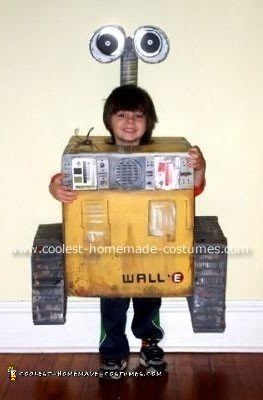 My son wanted to be Wall-E from the Disney Pixar film of the same name, more than anything. Not being particularly creative, I tried to convince him that Buzz Lightyear would be cool (a gasp! – store bought costume!).

My husband made his Wall-E costume from a box and painted it. The tires are made from another box that he cut and shaped around more cardboard. The gears within the tire are painted, also circles cut from cardboard.

The Wall-E neck is a painted cardboard can with a plastic lid (Ghirardelli hot cocoa!) attached to a circular mailing tube – all painted. Wall-E’s eyes are two baby formula cans attached with duct tape and again painted. To give depth to the eyes, my husband painted the bottom of the formula cans and made smaller cardboard cut-out for the front of the eyes.

And of course, Wall-E would not be complete without his cockroach friend – all cardboard, painted and glued together.

For night time, we have glow sticks to tape on to give Wall-E some reflective benefit as well as provide a more “robotic” touch. To cushion the cardboard and provide better balance, we put foam on the top of the box that sits on his shoulders.
So not only is it a great costume, but it was 100% recycled – the glow sticks (dollar store) were the only “new” item!