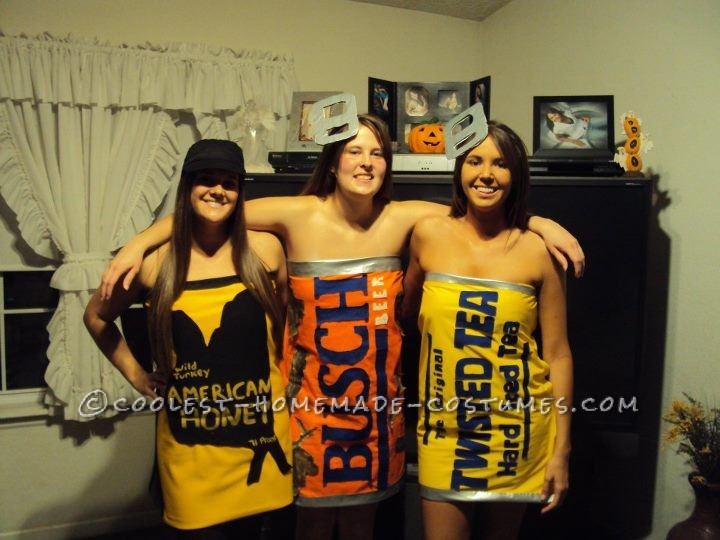 I am a huge fan of twisted tea, I wanted a bunch of girls to get together and do the different flavors but I only had these two join me so we did whatever beverage we wanted. I wont say it was the easiest to create, but just a little time consuming. You need a few items to create this outfit (I spent $20 max):

1. Felt Material ( yellow for can and blue for letters)

I first cut the yellow felt  material until it wrapped around me at least one and a half times (to leave a little room for fitting perfect in the end. Then began drawing the letters on the blue materail, I followed a stencil online and also had a can in front of me. Drawing and cutting the letters is what was the most time consuming.

I then had a friend help me to fit the dress perfectly. She drew little lines where I wanted to glue the felt strips on for a good fit  (felt strips allow for easy restroom access). You will also want to draw line where you will want to cut it at the bottom (I personally wanted the back a little longer than front for bending over).

I then glued on the letter and felt strips and let that dry for awhile. During this time you can make your tab, I jus cut the design out of a small piece of cardboard and spray painted it silver. I then used some tape to attach it to an old headband.

Then put the dress on and added the duct tape to the top and bottom. You want to have it on because if its not on the top or bottom may end up too tight.

Wala! You are a twisted tea! This outfit was a hit and I even won the costume contest!