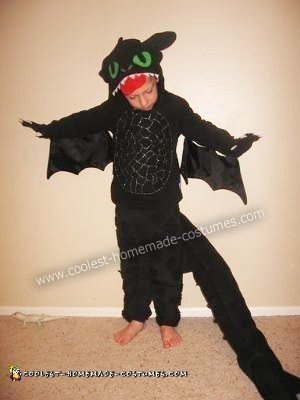 My son wanted a Toothless the Dragon DIY Halloween costume this year. So I bought a black sweatshirt and pants at a secondhand store. I decorated the hood of the sweatshirt to make the dragon face by cutting and gluing on felt shapes for the eyes, tongue and teeth. I painted on the nose with gray paint. I made his ears and horns by cutting out felt, sewing it, then stuffing it with batting. Then I cut open the top of the hood and sewed them into the hood. I then sewed black triangles down the back of the hood for scales.

I placed an oval piece of felt on the body of the sweatshirt and used black glitter paint to make scales on this belly. I cut out rectangle pieces of black felt and glued them all over the pants to make it also look scaly. Then I cut out more black felt in the shape of a tail and cut out the wings on the tail as well. I pinned the wings into the tail and sewed the tail together (this was very thick so I would use another type of material if I were to do it again). I then stuffed the tail with batting, cut an opening in the back of the sweatpants and sewed the tail in.

The wings on his arms were cut out and sewed with silky material and sewn onto the arms in 3 places so that my son would have some movement. I bought regular black kids size gloves, cut out white triangles and glued them onto the ends of the fingers of the gloves to make claws. The Toothless the Dragon DIY Halloween costume was a lot of work but very much worth it! 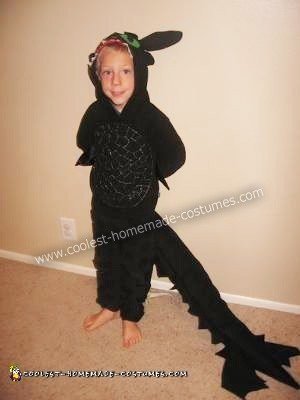