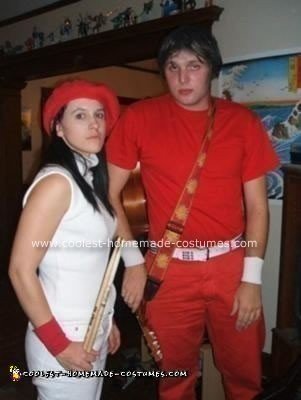 Last Halloween my boyfriend and I started brainstorming “couple costume ideas”. Neither of us were huge on the idea of doing a couple costume, but we figured if we came up with something worthwhile, we would do it.

I tried thinking of iconic couples or duos, and eventually came up with The White Stripes (Jack & Meg White) Costume. It was too perfect for us. Quirky and unique, yet totally fun and interesting.

The next step was to figure out how to make it clear that we were Jack & Meg White as The White Stripes. Their trademark is dressing in red, white, and sometimes black. I dug through photo after photo online, and eventually found one that was going to be pretty easy. It’s not from a specific album as far as we know, but more likely a photo shoot. Meg’s wearing mostly white, Jack’s wearing mostly red, and they’re both holding red umbrellas.

I dyed my hair darker than it was as to be closer to Meg’s hair color and we used black hair spray for my boyfriend’s hair since he didn’t want to commit to black hair. To top it off, I found a red beret at a local thrift store (about $4) and we greasily parted my boy’s hair. Also, I wore pretty much no make-up, since she’s wearing little to no make-up in the photo.

A plain red t-shirt was easy enough to find as well (about $5), and I found a white sleeveless turtleneck (about $7); both were found at a thrift store. I actually owned white jeans (God knows why…), but the red pants were almost impossible to find. In fact, we didn’t find red pants. We found khakis and dyed them red with Rit brand dye (very easy to find at any craft store and easy to use as well). Those cost about $4 a bottle and we might’ve bought two bottles.

Shoes were simple as well. I had white shoes and he had black ones. I made the wrist bands out of spare material and buttons I had lying around.

I think the most expensive thing was that silly white belt that was so necessary for authenticity. We couldn’t find a male white belt anywhere, or even a large woman’s one. We ended up going to Hot Topic and dropping $20 on it.

To help make it even clearer who we were, I borrowed a friend’s pair of drumsticks and my boyfriend brought his acoustic guitar. This worked since it was just at a friend’s house.

We, amazingly enough, didn’t need the accessories, as almost everyone who saw us identified us properly. Actually, at one point in the evening, I was away from my boyfriend and a girl asked me, “Are you Meg White?”

Overall approximate cost = $44 ($24 if we would’ve found the belt elsewhere).