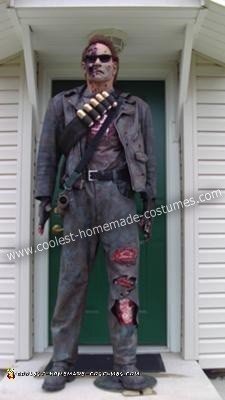 This is my Terminator 2 costume/life-sized that I finally completed. This was the most difficult and time consuming creation to date, but the end results were well worth it! I have always been a huge fan of the movies, and thought nothing would be more “cool” that to actually become the Terminator. So after many years of thinking about it I went ahead and tackled this tedious project which I knew would not be easy.

I then did washes of various colors of acrylic paints to get the costume looking really dirty and muddy, and as though it has been dragged across concrete which it also actually was. I then constructed the chest piece out of cardboard and aluminum tape, using papercraft folding techniques, which was my first time ever doing it. I then did the same for the shin piece, and added some cardboard shaping as well. Then I added pieces of flesh colored foam, which I then weathered up as well and added blood too, and made the wounds look like they were wet
permanently. I also added gunshot holes and blood stains on the coat, which are accurate placements and used a 12 inch NECA figure for reference.

I then added a red LED light for the eye, and blue LED lights for the chest piece, one blinking and one always on, and both have a removable battery. I painted and aged all the flesh parts to match.

I then made my first ever M19194A machine gun replica as seen in Terminator 3, out of foam and PVC pipe. Turned out absolutely great for my first attempt! I drew some templates on paper and then cut them out of the foam, and used hot glue to glue all the pieces together. I then added a plastic bullet belt. I painted the gun to look aged and dirty as well, and also painted up an Airsoft shotgun to look the same as the one in the movie.

I then made M79 grenade cartridges using deodorant bottles, washers, and water jug caps. I painted them to look like the real ones, and in a metallic gold finish. I used washers to simulate firing pins on the ends. I then added them to a grenade bandolier, which I also weathered. Then I made some battle damaged flesh fingers to match the other parts, and still using foam, aluminum tape and hot glue etc, so that they can be worn over my actual finger and hand. I also left some fingers open to maintain the “human” element, and will add some make-up and blood to my fingers later.

Then I added velcro backing to the chest piece, and the other half to a shirt, so that I could turn on all the lights and then attach it to that shirt, then pull over the weathered, accurate, gray shirt which has rips cut in it so that the chest piece will be exposed like in the movie. I also added some accurate sunglasses, and the mask can be worn with the red LED lit as well, as I made a LED with a 20 inch wire that runs down through the shirt and into my pocket. And that is a short summary. Took several months to complete and was years in the making, and I finally made another one of my costume/lifesized dreams come true! 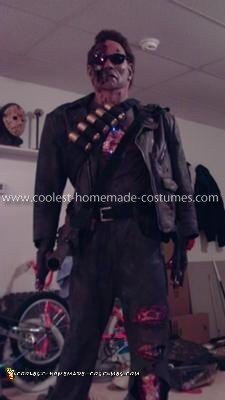 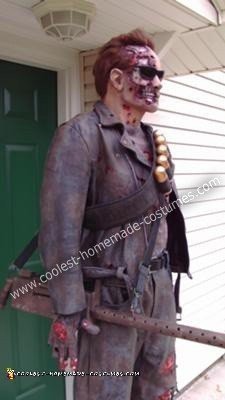 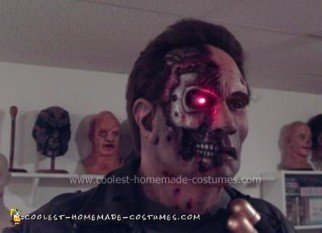