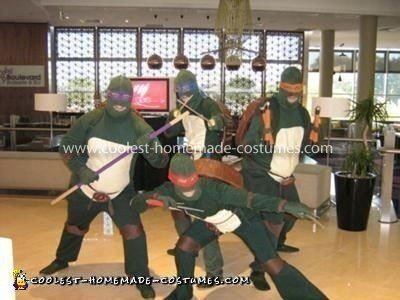 Cowabunga! These totally tubular Teenage Mutant Ninja Turtles Group Costumes were made from sweatpants and turtleneck shirts, with balaclavas for the masks and old washing baskets sewn onto backpacks for the shells. The washing baskets were covered in several layers of papier mache, then painted according to our individual tastes (we felt as each Turtle is individual, so should their shells be). That seemed to take the longest time, due to the drying time for each of the layers of papier mache. They still ended up being functional backpacks, and are still used to store the suits today.

The gloves were hand-sewn from patterns made from our own hands in the ‘live long and prosper’ pose. Some ended up being a bit tight and popping their seams, but in the end, they worked. We also used some translucent green paint to make fingernails (partly so we’d remember which glove was left and which was right!).

The masks were made of khaki balaclavas painted the right shade of green, with a hole cut for the mouth and the appropriately-coloured bandana sewn on. The masks kinda squished our noses a little, though. The plastron (chestplates, for lack of a better term) were made from pale yellow felt sewn onto the shirts. The elbow and kneepads were made from brown cotton, padded with leftover felt and sewn into the seams of the shirts and pants at the right points. The wristbands were made with elastic and were a separate piece.

The belts were made of the same cotton as the elbow and kneepads, and were sewn into the shirt. They tied up in the front, and to allow the shells to still be removable, a separate belt was glued to the shell which gave the illusion of the belt going all the way around. The shoes are just canvas slip-on shoes, painted green, with the toes created artificially with a bit of black marker and the same translucent green used on the gloves to create toenails.

We’ve worn these to two different conventions here in Sydney, Australia, and have proven to be incredibly popular. In fact, when we wore different costumes to a recent con, we had many people express disappointment we weren’t the boys in green! 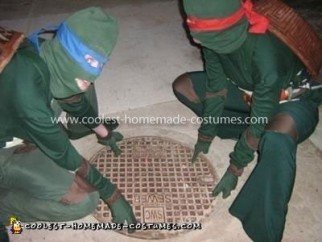 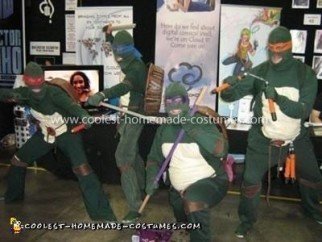 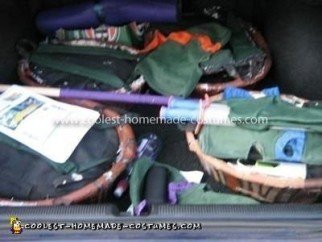 Coolest Bebop and Rocksteady Costumes 10 from the Original Ninja Turtles