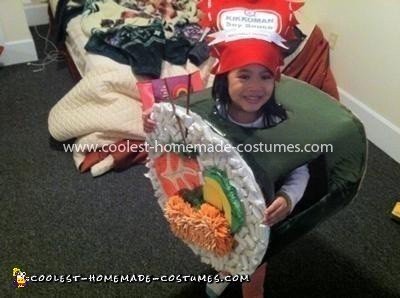 Got my ideas from one of the sushi roll costumes from your site and another site a couple of years ago. So cute! Inspired by some on here and others around the Internet.

Body of sushi.. used cardboard that I cut out and rounded.. put black felt around it and green film over the black felt to give it that “seaweed wrap” look.

For the rice.. I had to use green packing peanuts (bc that’s all they had) and used white duct tape over it since paint dissolved it. Ingredients in the middle were made out of painted styrofoam, more green film, yellow sponge, and a car wash sponge.

Also glued on two chopsticks and used red felt for the soy sauce hat package. I printed out and drew in the soy-sauce label. Was a big hit!! Used the hot glue gun to put the rice together but didn’t hold on that well. I mostly used clear packaging tape to hold onto everything else and whatever fell apart! It held better than the glue.

This Sushi Roll Costume was a big hit!