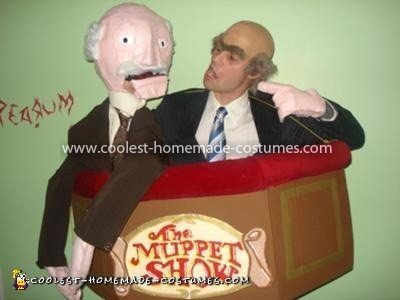 This is my first time submitting a costume to “Coolest”. For the upcoming release of their new film this year I went as Statler and Waldorf from the Muppets. They are the two cranky old guys in the balcony.

Every year I like to try and challenge myself both with the costume and the make up. In the past I have made large costumes out of boxes. Also I have worked with make up in several ways. Everything is self taught and the only reason I do it is because of the challenge I like to give myself.

This year’s make up job was a new one for me because even though I have done a bald cap on a friend before… applying one to your self if not the easiest process but it turned out quite well thanks to the fun fur added for hair.

The balcony was fun to create because I wanted it to be a bit larger to accommodate two people but I wanted it to be movable. It is basically cardboard but I wanted to add little touches like the red velour banister and the logo for those who have no idea who the Muppets are (sadly there are those out there who don’t know them).

Finally, many people kept asking me who my partner was going to be in the balcony but when I create a costume I don’t usually do group ones so I decided to make a partner. The basic frame is paper Mache and though I do not have the resources that they do at the Muppet workshop I think the face came out well using the felt.

Hope you all like this Homemade Statler and Waldorf Costume and remember… “Why do we always come here? I guess we’ll never know. It’s like some kind of torture to have to watch the show.” 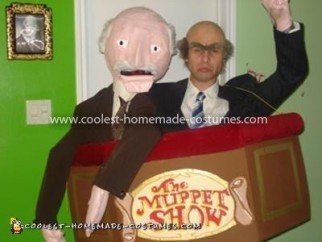 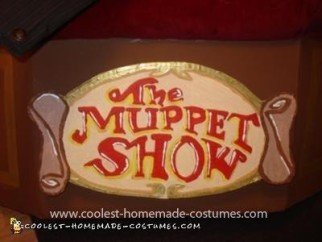 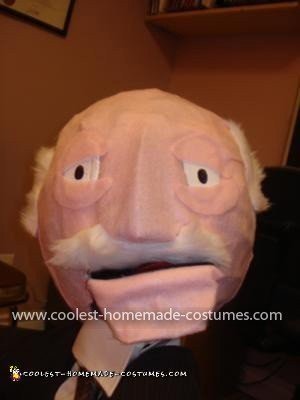