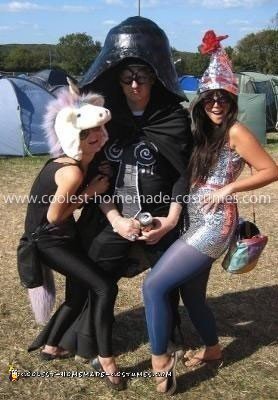 Just wanted to say your site inspired me. Found your collection of Lord Helmet costumes and thought “Totally awesome” and “I can do that” so here is my own Spaceballs Costume.

Using nothing but a plastic colander, some coat hangers, newspaper, black spray paint and some glue I fashioned a giant Space balls Helmet to form the core of this epic lord helmet costume. Enlisted the help of an art teacher friend to re-acquaint me with the way of the Paper mache’.

It’s purpose: as a celebratory costume for a well known UK festival called ‘bestival’ as part of their themed dress up day – in this particular year the theme ‘lost in space bestival’. Problem was we had to transport the giant helmet several hundred miles and a two hour car ferry in a tiny little hire car with five people, all their luggage, camping gear, costumes, food and booze to last the entire weekend. Was slightly cramped to put it mildly.

Was a right pain in the ass to get it there but once unveiled no costume was my equal. Had full intentions of entering the costume cat walk competition but got too hammered to actually remember to do so… fun times