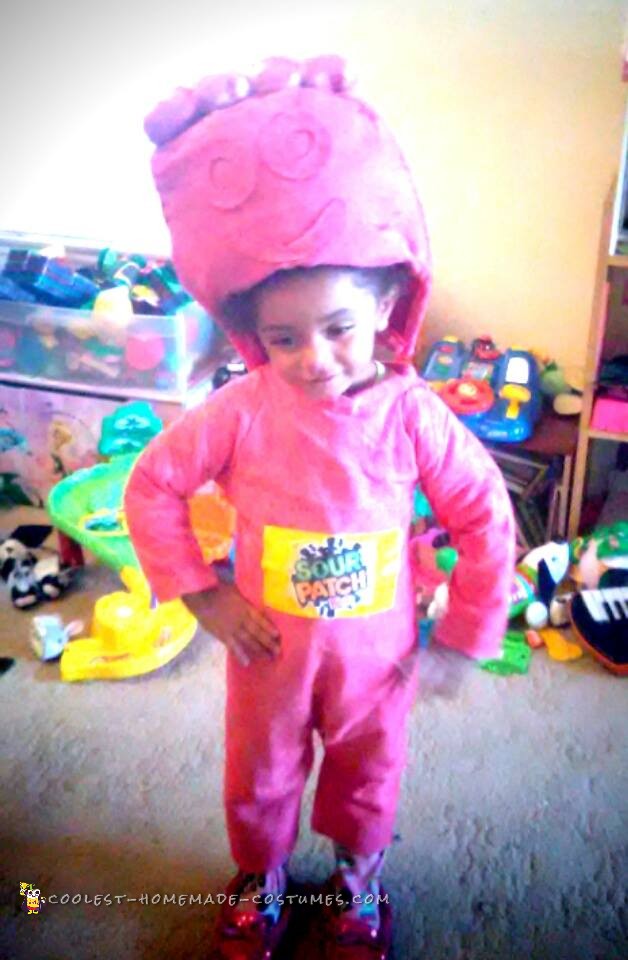 I started off with an old pair of pajamas the my daughter didn’t need anymore. I cut off the feet from the pajamas and bought some red fabric from the salvation army that I could hot glue onto it. It took me about an hour to completely cover the old pajamas with the red fabric.

I spent about $3.00 making the entire costume! All I ended up buying from a store was the red fabric which ended up being half off because it was cut wrong. I then took an old sweater that we didn’t need anymore and cut off the hood part. I then took some cotton from an old pillow and hot glued it to the top of the old hood. I covered the cotton on the hood with the red fabric I used for the body. I also used the leftover red fabric as the eyes and the mouth.

I took an old yellow T-shirt and cut out a square from it and then I hand drew on the Sourpatch kids logo with a sharpie marker. I took four balls of cotton and smashed it together and covered it with some more of the left over red fabric. I then added them to the top of the head with the hot glue to use as the hair.

This costume is already a hit. She wore it twice to two different events and got hundreds of compliments on it. Nobody has ever seen a Sour Patch kids costume before so they were extra impressed with it! I think it was quite easy to make! This could count as a last minute costume idea to me. :)