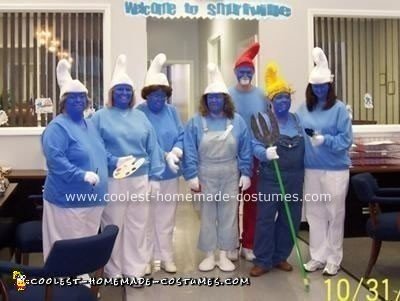 Our community has a Halloween Costume contest every year. We had seven employees in our office and wanted everyone to dress in a theme. Since everyone in the office was old enough to remember the 80’s when the Smurfs were popular it was an easy choice. Each Smurf costume was less than $20.00 to put together.

The hats were cut out and sewn according to each one’s head measurement, then stuffed with paper to make it stand up. The face makeup was purchased and mixed for the perfect Smurf Blue. The white pants, blue sweatshirts, and white gloves were purchased on sale at department stores.

Papa Smurf has red pants and a red hat. Instead of a full white beard he’s a little hipper now, with a goatee. Blue pom poms are attached to the seat of the white pants. Each employee chose the Smurf that reflected their own personality and accessorized accordingly with items around the house.

From left to right Painter, Jokey (not shown in this picture-the “exploding” gift), Grouchy Handy, Papa, Farmer, and Vanity Smurf. We had a great time and also one first place!