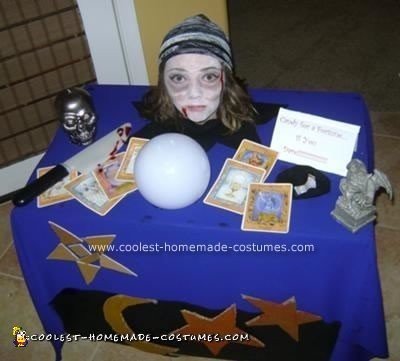 My daughter wanted to be scary and dead. She really wanted to do the head on the platter but it had been done a lot before so we decided to do something different. So she was “severed head fortune teller.” This Severed Head Fortune Teller Costume was really easy and just required a lot of glue!

First we found a box she could climb into and sealed off any ends. Then we painted it different colors. I then marked where her head would be and cut a hole for that. I then cut a hole for candy and for her crystal ball. Then I made handles for her on the inside so she could hold up the box with more than just her shoulders. I glued some fabric on the top and of course cut it to match the holes.

I glued black fabric individually to make a star in the neck part. This way it looked like the “platter” or place her head was left, and wouldn’t hurt her as she walked. I then glued black fabric around the hole for the candy so it would look better and not hurt anyone’s hand as they put candy it. I glued a pillow case under this so she didn’t have to carry anything. Then we glued real tarot cards on along with the candle and figurine.

We then put the bloody knife there so the weapon that killed her was known. A sign was glued next to her candy hole to show everyone where to put the candy and letting them know she would tell them a fortune if they gave her candy. I then put a glass light fixture in the front, glued it in and this was her crystal ball. We taped a blue flash light in the ball so it glowed while she walked at night.

This really was a neat costume and fun to make!