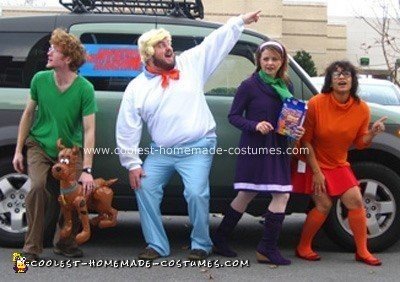 Here is a brief overview of how each went about making their Scooby Doo Group Costume.

Shaggy: The signature green, n-veck shirt he found at a local store and the brown pants he had. Naturally, he has thick hair and had a goatee, so Shaggy simply made his hair as shaggy as he could get it! He found Scooby (kids’ inflatable toy) online. He wore brown boots to finish it off!

Fred: Fred already had the perfect pants. He got a white sweatshirt and the orange fabric for his tie at Walmart. The blue polo (he already had) to go underneath. The “Fred wig” was purchased online and the shoes were his own.

Daphne: She had success at a store in a local mall, where she found a great purple dress and the boots at Plato’s Closet. She covered a headband she already had with fabric. The white stockings she also already had. Lastly, she went to a hobby store for her green fabric for her signature scarf!

Velma: Velma did her best to match everything orange! She found her skirt and the perfect stockings for the outfit at American Apparel. The orange turtleneck was from The Limited. Her shoes were from a local thrift store! She styled her hair to suit!

We all got a lot of praise for coming up with costumes so closely resembling the cast! We had a great time!