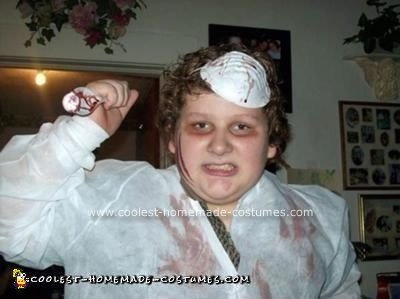 My son was tired of choosing costumes at our local store to run into a handful of kids wearing the same thing. So we conjured up the idea of “Scary Evil Optometrist Halloween Costume”. He wanted to be something scary and he came up with the idea all on his own at age 11. He said he wants to be something extremely scary and then he said an eye doctor!

I thought for a minute trying to figure out how an eye doctor could be scary? He then tells me “If there was a crazy eye doctor that tried taking your eye out with a spoon wouldn’t you be scared?” as I did find that image disturbing I thought.. I could do something with that wonderful idea.

I went to our local hospital and asked if they had a inexpensive doctors robe I could buy. They showed me a disposable doctors gown, I was thrilled it was free too! I them bought painter’s masks and green gloves to give an eerie mad scientist feel. I bought a body tattoo made for Halloween which was claw marks which worked well for the dramatic effect of a victim trying to escape.

My son then decided he needs a large spoon to remove his clients eyes. I went in the dollar aisle and grabbed a set of 3 plastic spoons (back up in case he loses one). I took an eye gumball, cut the bottom open, mixed wood glue and red food coloring together and glued the spoon into the open end of the gumball. Wood glue will dry rough which gave it great effects when mixed with the food coloring.

I also took a q-tip with yellow food coloring and rubbed on his teeth and took a tooth pick with green and went in between his teeth. The make-up on his face is all Wal-mart generic women’s make-up, colorworks I believe. I prefer working with real women’s make-up since I feel I have more control and the bruises and dark circles look realistic.

The entire process took about 2hrs to complete, that is with the 1.5hrs for the glue to dry on the spoon. The rest was very simple, the claw mark tattoo I had taken a q-tip and dabbed stage blood a long the edges of it. We had so many Oooh’s and Aaah’s from his Scary Evil Optometrist Halloween Costume it was unbelievable. We even had a few people in our local video store turn around and jump a bit when they seen him.

It was really fun to put together and hopefully we can top this idea. The most important part is the costume had cost less that $7.00 that is including the box of food coloring used and all other items.