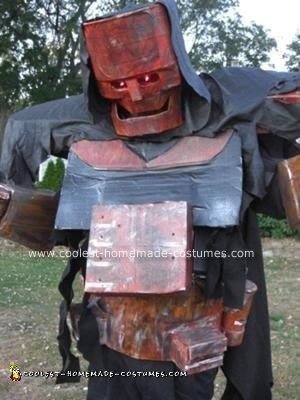 This Rusted Robot Costume started out as the ABC Robot from Judge Dredd. I started making the head first and I was close working from memory only. Then I looked him up and my jaw was a little wider than Ithought to make the upper supports but I tried and the coloring was a combination of spray paints, pastels, crystal clear and all brushed to make look like rust. Everything is made of cardboard with added Christmas lights, two nine volt batteries to light up up the front panel and rear panel along with the two eyes all red.

After painting it I added the black material over it to give it some more life. The boots are huge.
I used construction adhesive to glue my old work boots down on cardboard then built up the cardboard around it till they looked like space boots, kinda like walking like that as well.

The belt in the middle I wanted it to be different so I made two cardboard boxes that would hold my stuff when I walked and extra lights for my other costumes just in case. Then after I just about completed it I realized I couldn’t drink while I had the head piece on so I used two snap lids with the hard plastic straw drink cups, mounted them left and right for balance and used surgical tubing my neighbor had to run up to my mouth so I could drink without removing the head piece everytime.

Cardboard, spray paint, model paints, pastels Christmas lights, old pair of boots, lots of duct tape about 5 rolls this machine, about two weeks at night after kids went to bed and near midnight or later some nights it was easy to do… oh and screening so I could see out. I looked through the neck area of the robot so it made him look like he is 7 feet tall. I’m already 6ft 5 so it made it look bigger.

He is now the only cardboard creation that I have saved. He is on a petalstill downstairs in my basement over looking the bar. All the others the kids used while playing. 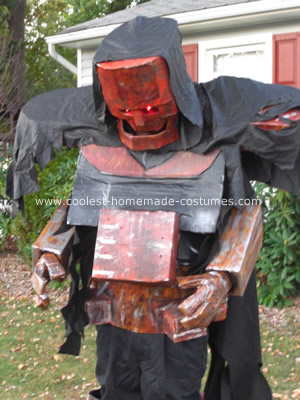 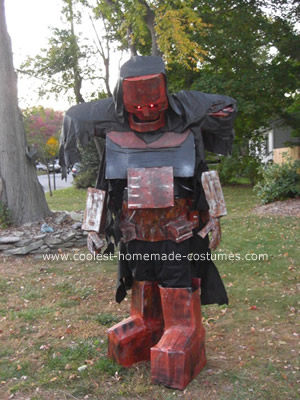 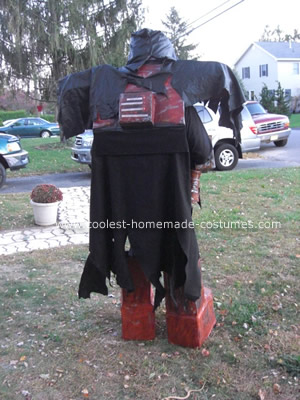