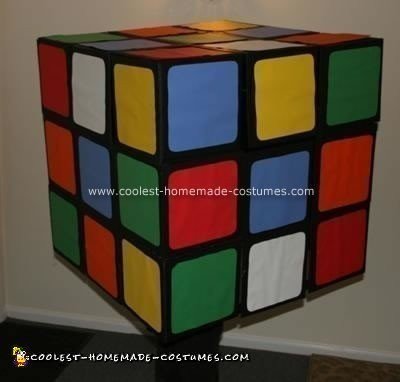 We started with a half-inch PVC frame of a cube thirty inches square (so it would fit in the car) which was painted black and allowed us to attach the shoulder straps. We then covered it with fabric net which allowed both vision (through the areas between the colored squares) and the ability to breathe, which is very important.

We used black foam board cut into ten by ten squares and used an iron to flatten the edges, giving the illusion of depth for the cracks between the squares on a real Rubik’s cube. On top of the foam board we used scrap booking card stock which matched the colors on a real cube. All of this was formed into corners consisting of three pieces for the, well, corners and then two for the edges so the foam board pieces looked like they were solid parts. These parts were then glued onto the PVC and mesh frame with about a quarter inch gap between them giving plenty of room to see.

A pair of black pants and shoes made up the rest of the costume and we were off. Plenty of people wanted to know if the cube would rotate, but that would take a lot more engineering and I doubt it would have left much room for the kid inside!