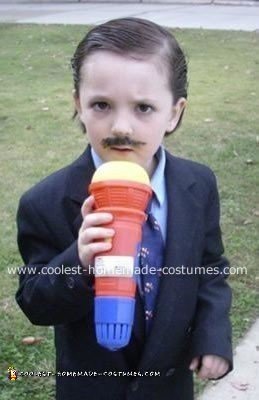 This is my 6 year old Jake dressed in a Ron Burgandy costume. It couldn’t have been more simple. He already had a little suit and tie, so I slicked his hair over and gave him an awesome mustache made of mascara.

We also had him find his toy microphone from his toy box and carry it around the party with him. We taught him that when people ask, “Who are you” he was supposed to respond with, “I’m Ron Burgandy…Stay classy San Diego.” When we got to the party none of the kids knew who he was but we had the adults rolling on the floor. I don’t know why it is so funny, but just looking at the picture still makes me laugh. He was so earnest when delivering his line, in fact I think he was saying it when I took this picture.

So in conclusion this costume cost absolutely nothing. We had everything already, we just added his attitude! He was most definitely the hit of the party and now he has the bug to make people laugh, so I am really going to have to work hard next year! Enjoy

A Ron Burgundy Costume for a Woman