I was out literally shopping for Halloween costume inspiration when this Rainbow Brite Homemade Halloween Costume hit me. I’d originally been looking for items to dress up as something completely different, when I came across these amazing rainbow-colored foil eyelashes ($4). I’m not really sure what possessed me to get them, but for some reason I couldn’t resist.

As my shopping excursion continued, I remembered that I had a yellow wig at home already. I’ve loved Rainbow Brite since I was a kid, so that pretty much sealed the deal for me.

I found the blue dress at a thrift store for $8. I think it was once a bridesmaid’s dress. It originally had short sleeves, a sash and an underskirt that hit about mid-calf. I cut off the sleeves and extra skirt and used the sash as a hair ribbon.

I bought a short, white petticoat from a costume shop for about $12, since what was left of the original dress was rather short. My roommate offered me the use of her long rainbow socks, which I put on over black tights. The boots were mine that I already owned, and just seemed to fit.

That left Rainbow Brite’s belt, suspenders and sleeves/arm bands. The arm bands were easy, once I found some rainbow-colored ponytail holders at the drugstore ($5) which I could wear around my wrists. I purchased a canvas belt from the costume shop as well, that was almost like a rainbow (it was only green, yellow and red) for about $10. I used construction paper to make a rainbow cutout, which I taped over the metal belt buckle. I had some leftover red ribbon from a previous project that I used to make suspenders. I attached them to the belt with safety pins.

The finishing touch was the blue star on my cheek, which was one of those little stick-on jewels you can find at any Claire’s. I’d had a box of those things for years.

This was maybe my best costume victory ever, especially considering how well it came together, despite the haphazard creation process. I can honestly say I’ve never found a costume idea that began with a pair of eyelashes before. Everyone, at least, all the girls at the party knew who I was instantly. 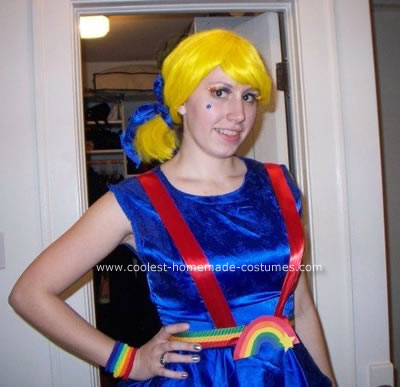