I have eight year old quadruplets and each year we choose a Halloween costume theme and I make all of our costumes. This year, we decided to do Alice in Wonderland costumes.

The Alice costume was a pattern for Alice that I made, no problem; it was pretty easy.

The Red Queen was adapted from a queen costume and then I added in the heart panel and added the stripes down the front along with the hearts and jewels.

The Mad Hatter was a bit tricky. I have never made a hat before and I now think that hat makers deserve whatever they charge. It is quite difficult to make a top hat stiff and also be able to sew it and have it come out the right way, especially on the average old sewing machine. The jacket was originally a mans suit coat that I took apart and then made into the shorter version for the Mad Hatter.

Our Playing Card was a large sheet of foam that I covered in white fabric and then added the felt hearts. The sword was a piece of PVC pipe I painted red and I put a Styrofoam tree shaped piece on the end and then made a stuffed heart to add to the end. I made shoe covers out of felt. I also added the cuff to the red gloves that we already had. I decided to participate this year and go as the White Queen.

My dress was a wedding dress I found at the thrift store. I removed the train and lots of sparkly lace and shortened the sleeves. I made the train into a robe that was attached to the back.

We won the groups prize at out town contest. Everyone just loved out costumes and our theme. This years was my favorite so far. 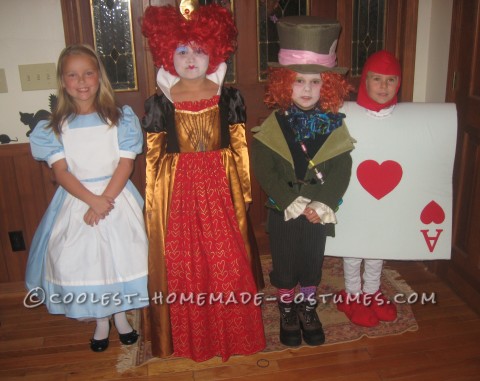 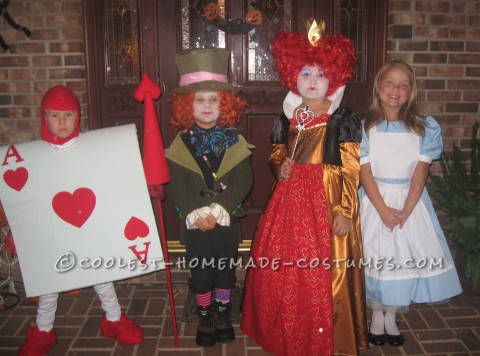 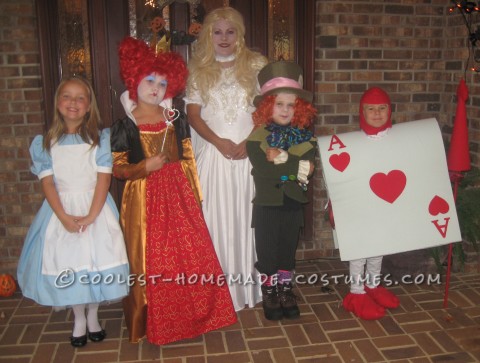