I wanted to make a Popeye and Olive Oyl couples costume. I wanted to make a fun, sexy version of Olive oyl. All of the materials for this costume (except the shoes) were from the thrift store. The skirt was a skirt bought from the thrift store. The yellow band around the skirt was from a yellow apron. I cut the pieces and hot glued them to the skirt. Make sure you cut pieces large enough to fit around your curves or you wont fit into the skirt when it expands.

The shirt was a V-cut long sleeve red shirt bought from the Salvation army. The white pieces on the shirt were made from a men’s dress up white shirt and glue gunned to the shirt. Pretty simple but time consuming for details.

For Popeye,  the pants are blue scrubs that were bought from the Salvation army. The yellow belt was made from the yellow apron used for Olive Oyl costume and pieced together with glue gun. The shirt is a black short sleeve button up and the buttons are cut from the same yellow apron from the apron. The blue part of the sleeves were cut from a second pair of scrubs that were cut up, folded and glue gunned. The red part of the shirt was made from a red target employee shirt we found at the thrift store and cut up. The black lining was made from the belt-tightening strings from a black pant that was glue gunned around.

The sailor hat was bought from Party America, black shoes were Timberlands.

Just wanted to show everyone that you can make costumes for cheap that look great! Total price for both costumes was about $30 including the glue sticks and gun. 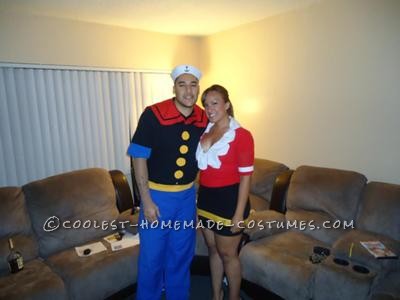 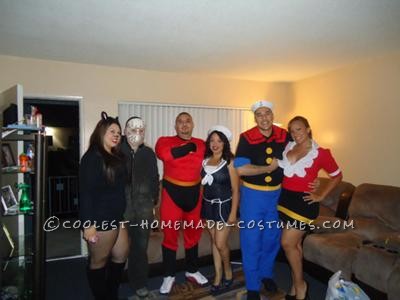