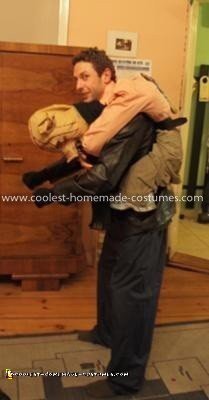 I made this Homemade Piggy Back Illusion Costume for our annual Halloween-party at the university. The feedback was amazing, and the fun of running around screaming, playing the role really made my day.

The costume is cheap butt takes some time to put together properly. Cheap; since most of the material is stuff you have at home (your own clothes!).

Materials:
-Mask (any whole-head-mask will do)
-Some wires, of the rather stiff type (to hold the little body)
-Plastic hand (optional)
-Clothes, shoes etc.

Preparation:
My first idea was to get a old-man-mask, but with not many halloween/costume-stores around, I had to do with a pig-head. So as you see, anything will do!

To make the illusion best its important to highlight the build-body, so I used dark, mainly black clothes and lighter clothes for the build-extra-body. This because I knew I would be a dark place that night, and wanted the illusion to highlight.

You also need some bigger clothes for yourself to hide protruding parts of your body, most importantly your shoulders. So a jacket with shoulder pads or something like that.

The extra body you just have to work with to get it to look somewhat normal. I made a very simple skeleton out of wires, took on the clothes and filled it all with towels.

You need a shirt or something that can be closed around your neck. I used a normal shirt and locked the two upper buttons around my neck.

The shoes I just tied to the towels which I used to fill the legs.

Then its the hardest part, the head. I filled it with a blanket, used duck tape to make a “neck” on it, and hanged it around my head using the strap from my Canon-camera. And I used a black scarf to cover the space between it and me.

I bought a plastic hand last Halloween and used this to top the illusion, and put on gloves to cover mine.

That’s it!
And the fun is that you can make dozens of different variations of this. So go and create! 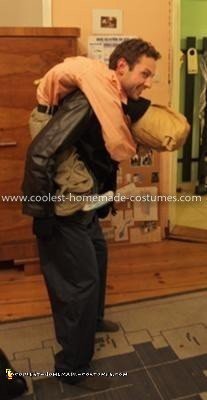