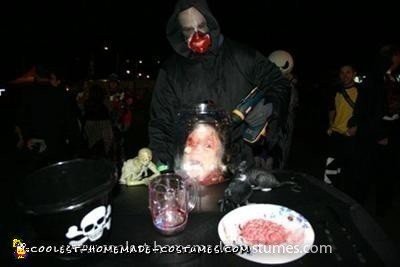 Our Homemade Pickled Head in a Jar and Wheelchair Table Costume won a contest last year which made us more determined to come up with something better last year. I suffered a knee injury about two months ago, and just when I had recovered I was bitten by a venimous copperhead snake. So not completely recovered I told my husband I didn’t think I could stand long enough to participate in the contest this year..that is when our idea was born. I would have my head in a jar sitting on a table and he would stand above me drilling my head. This allowed me to sit in a wheelchair underneath which gave the illusion the table was floating.

We used a piece of cardboard and cut a hole in it and put cloth around the sides. We then decorated the table with plates, forks, dead birds, and a zombie that crawled and tapped on the jar. We cut a hole in a large cheese jar and placed it over my head once it was tuck through the hole. I then sat in the wheelchair and wa-laa and moving table with a zipper-face drilling into my head. Zipper was applied to his face with gum adhesive and fake blood to accent the face.

Our costume was a total hit!