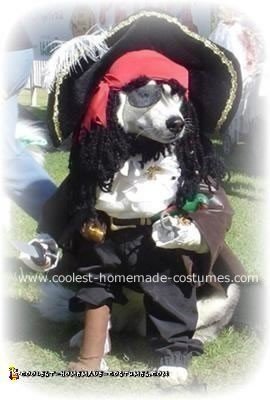 I make my dog’s Halloween costumes without a pattern. I get an idea, draw it on paper, take measurements, gather supplies, cloth, embellishments, etc.

For this pet costume I knew I wanted only two pieces to make it easier to dress my Siberian husky, Pasha. I found a dog harness and made him wear it a few times so that he could get used to the feel of the harness.

For the pants I attached them directly to the harness. One leg was longer and had elastic to hold it down on his ankle. The other leg I created a peg-legged look using a woodgrained material, made the pant leg shorter and attached the peg leg to the pant leg. The peg leg opened in the back and closed with Velcro. The blouse was just a piece of white shiny material attached to the harness and had elastic sewn into the top to be able to tie it around his neck. The fluffy white front was actually an old hair scrunchy that I attached and added a gold pin.

I measured the jacket material to fall just below the belt line, hemmed the edges, added a collar, and sewed the front to the harness. I added the belt and attached it to the harness. The arms were stuffed using cotton and wire so that they could be shaped. Cuffs, shaped hand and hook (made from a bungee cord hook painted and glittered, and a hand painted parrot, former a yard ornament) were added. A see through ribbon was sewn to create the gold coin holder.

The hat was found in a garage sale. The patch is black screen material (so he could see through it) and a hand carved stamp of a skull was applied to the patch. A red shirt was cut up to make the bandanna and curly yarn was attached to represent hair.

Beads were added to a string of yarn for decor. Yarn was added to the chin strap for a beard. A painted mustache was added to his face. A plastic sword/knife was attached to his hand. My dog is very tolerant and allows me to dress him up. The clue is to only dress the front portion of the dog, thus allowing freedom to relief themselves if needed. Lots of hand sewing with this project since it had to be attached to the harness.