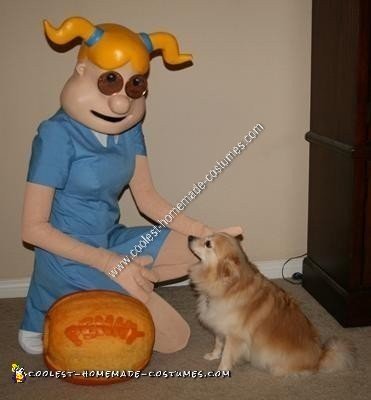 I got the Homemade Penny Cartoon Halloween Costume Idea shortly after Halloween 2009 when I stumbled upon a large toy penny that belonged to my boyfriend as a child. I was a big fan of Pee-Wee’s Playhouse and had never seen anyone attempt to re-create Penny so despite having never worked with paper mache or clay in my life I decided to give it a shot.

I constructed the head by wrapping chicken wire as close to my face as I possibly could then covered it with several layers of paper mache. From there I sculpted the features with masking tape and newspaper and covered the entire thing with paper mache clay. After several gesso and power sanding sessions I got it to a smooth texture and painted it. I then pulled all of the chicken wire/paper mache out of the inside of the mask and just left the clay to give myself more breathing room. Had holes cut out of the large fake metal pennies I had gotten for the eyes and airbrushed the whites of the eyes on the black screen I had glued onto them. My boyfriend helped me install a computer fan powered by a 9 volt battery facing out of the screen covered mouth to expel some of the heat from inside the mask while I was wearing it.

The arms/legs are made of tights I hand painted and my mother made the dress and gloves which I covered in painted tights as well to maintain the texture from hand to arm. I had a speaker in my dress that was wired down my arm to an ipod shuffle in my right glove that I used to play about 35 phrases in Penny’s voice I recorded from the Pee-Wee DVDs. 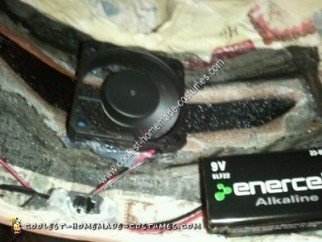 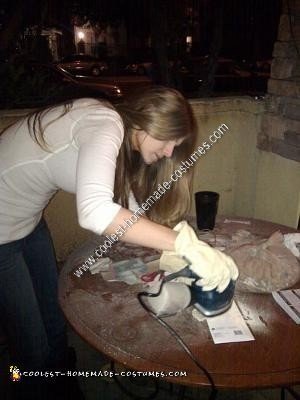 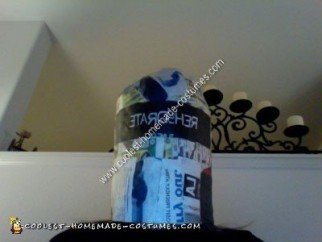