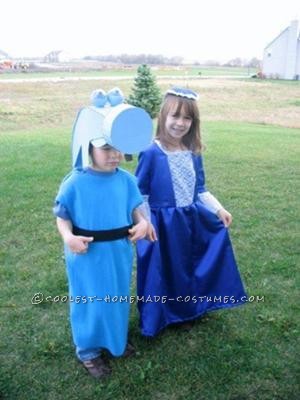 My son was obsessed with Handy Manny and especially Pat the Hammer.  So I set off on the adventure to make this Pat the Hammer from Handy Manny costume for him.  The body was easy. I just used light blue and black felt.  Felt is awesome because it doesn’t fray so no sewing necessary.  I folded the felt in half and taking one of his t-shirts I marked where his head and arms should be on the felt.

Then I just cut and sewed up the side seams. But like I said before, I could have hot glued it and it would have worked just fine.  The head was the key to making this costume. I used 3 pieces of cardboard (just an old box cut up), a paper mache round box for the circle part which I found at Michaels, an old baseball cap, 2 plastic clear Christmas ornaments (Styrofoam balls would work too) and two wiggle eyes.

I started by freehand drawing the side of the hammer head (you could get images off the internet too). The picture doesn’t show it but the head does go back behind him just like a real hammer.  This took several tries because it was coming out too small and we wanted it to fit over his whole head.  Once the size was right I just traced it onto the old cardboard box and cut 2 of them with scissors.  Next, I hot glued the sides onto the baseball cap. This is what keeps it on his head. It’s like one giant baseball cap in the end.  I measured the space between the two cardboard sides and the length and cut out another piece of cardboard for the center (where the eyes will go). This got hot glued on as well.

The cardboard was flexible enough to make the nice curve down the back of the head. Circle nose part (paper mache box) was hot glued next and finally the eyes. At this point, I painted the entire hat/hammerhead including the bill of the baseball cap.  I used light blue craft paint but I’m sure spray paint would work too.  I think I did about 3 coats.  If you’re going to use spray paint, don’t glue the eyes on until after you spray paint all coats.  I added some big wiggle eyes and a black piece of felt around his waist and we were done.

This took just a couple of hours.  The hardest part was getting the side of the hammerhead drawn and looking like a hammer since I am not an artist by any means. I used tons of hot glue for everything and I mean tons.  My son loved it and won the best costume contest this year.  Just a side note. I dressed as Handy Manny- used one of his construction play hats, painted the sleeves of an old tshirt green and put on my tool belt.