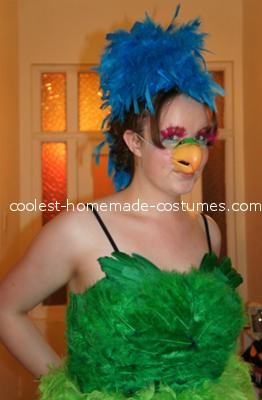 I made this parrot dress because I’ve admired the one Lily wears in Season 1 of How I Met Your Mother since it originally aired.

I am rubbish at sewing so I bought a dress and covered it in feathers (which was messy but worth it!). I covered the bodice with individual green feathers and attached feather boas to the skirt. I attached more boas to the back of the dress than the front to make a tail. I then lined the inside of the tail with individual red feathers.

I used a blue feather boa as my head piece which turned out to be simpler than expected. I tied my hair into a pony tail, clipped the boa to the top of my head (with it draping over my face) then flicked the boa over the top of the clip and pinned it to my ponytail. It kind of looked like a Mohawk but it suited the costume really well.

I wore pink feather eyelashes and a silicon parrot beak that can be found on eBay and Amazon for around $5.

I got so many comments on the costume and I’m really proud of the result.