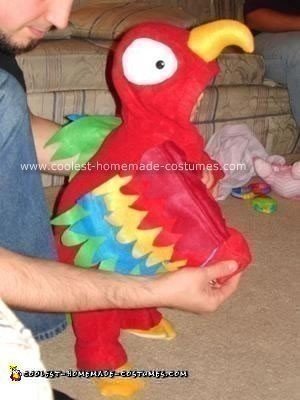 My oldest daughter (3) wanted to be a pirate for Halloween, so I dressed my younger child (7 months) up as her parrot. Gleaning ideas from the other parrot costumes on this site, I went to work.

I began by scouting online auctions for red bunting. I wanted the arms to have optional hand-covers (in case of extra-cold weather) and a hood was required. I found the perfect candidate and won the auction (for only $3 and change!)

From there I purchased sheets of felt in red, yellow, green and blue at my local craft store. I cut two of each layer so that I’d have mirror copies for each side, but mostly free-handed the wings and tail feathers. I assembled the wings by using patch glue and then sewed them into the seam of the bunting. I did something similar for the tail.

For the eyes I used white felt, cut two together and used patch glue to adhere them to the hood. I topped them off with large googly eyes purchased at the craft store. Then I free-hand drew the beak on yellow felt, cut it out and sewed the pieces together. Once sewn, I turned them right-side out, stuffed it with batting and attached it to the hood. 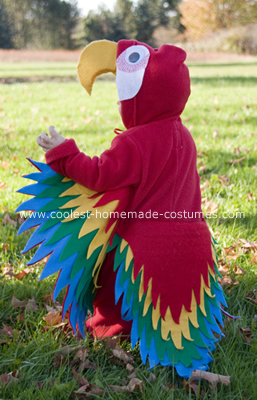 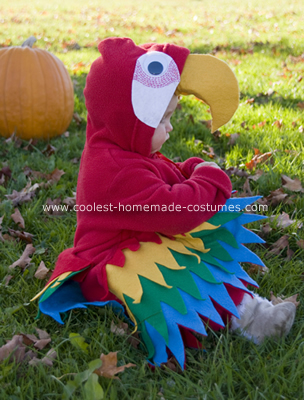 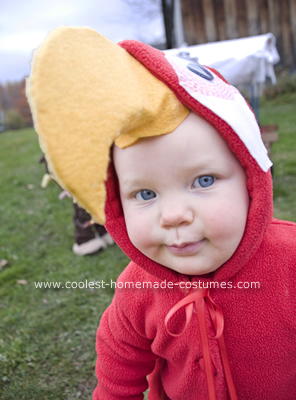