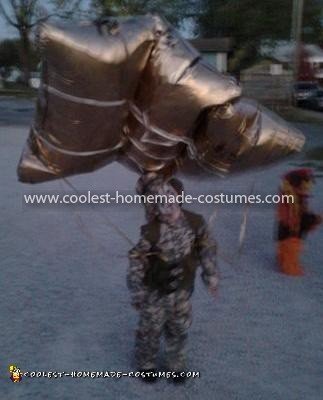 My 5 year old son wanted to be a Paratrooper so we decided we would buy a cheap costume and then just add to it. We started off by buying a cute paratrooper costume at a local costume store. We then added combat looking boots. We added a vest style thing to look like the parachute pack.

I painted his face all white and let it dry then I added stripes of army green across his face. The hardest part was the Parachute. I bought Mylar balloons from a party store that were rectangle in shape. These were actually Pirates of the Caribbean balloons and I took spray paint and colored them a gold color. I let them dry then I took ribbon and lots of packing tape and fastened the balloons in a parachute-looking pattern. I took ribbon and made the strings and then I fastened them to the vest thing that he was wearing.

He got 1st place in the costume contest for his Paratrooper Costume and lots of compliments throughout the night. The only downfall was that the helium did not last as I would have liked it to because of the cold temperatures but it lasted good enough. He absolutely loved his costume. He asked if he could be it again next year.